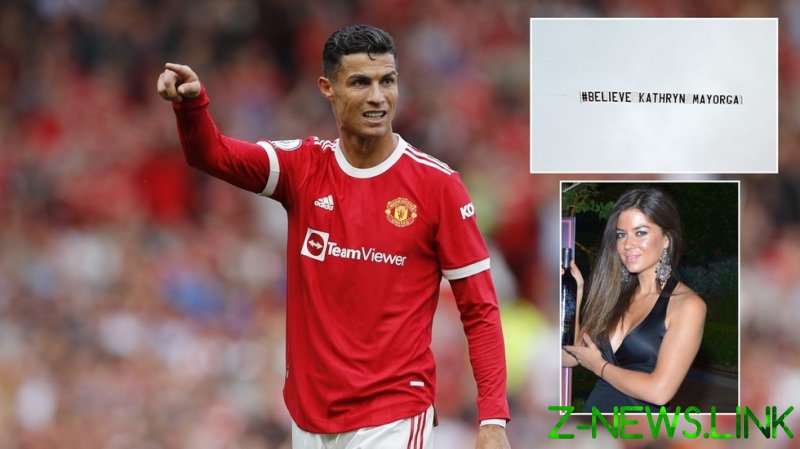 Making his ‘second debut’ for United, the Portuguese star made an instant impact following his summer signing from Juventus by scoring twice.

But some resent his very presence in the English top flight, with self-described “feminist community for gender justice” Level Up flying a plane over the iconic football ground with a banner that read: “Believe Kathryn Mayorga”.

“We just did something incredible and it’s all thanks to your support,” the group began in an Instagram post.

“With thousands of fans gathered at Old Trafford and the world’s media watching, we flew a plane over the Man United football ground. Our message is simple: Believe Kathryn Mayorga.

“Kathryn Mayorga alleges that Ronaldo raped her in 2009. She immediately reported it to the police, underwent a rape kit examination, and in 2010 there is evidence Ronaldo paid her $375,000 to never speak of it again…,” the statement continued.

“We are saying NO to the hero’s welcome Cristiano Ronaldo received at Man United.

The group’s action is a follow-on from threats to “disrupt the fanfare” regarding Ronaldo’s remarkable return to United and “remind crowds of the unresolved allegations” from 2009.

Police dropped the case after not being able to prove anything “beyond reasonable doubt” although Mayorga is still pursuing a civil lawsuit against the star.

Ronaldo has vehemently denied the allegations, describing rape as “an abominable crime that goes against everything that I am and believe in”.

Asking “Who could this be?” when sharing a link to a story that said a feminist group was planning to pull off a protest of this nature before Saturday’s game, Level Up might be forced back to the drawing board as Ronaldo’s achievements on the pitch again overshadowed anything that his detractors off it have up their sleeve.