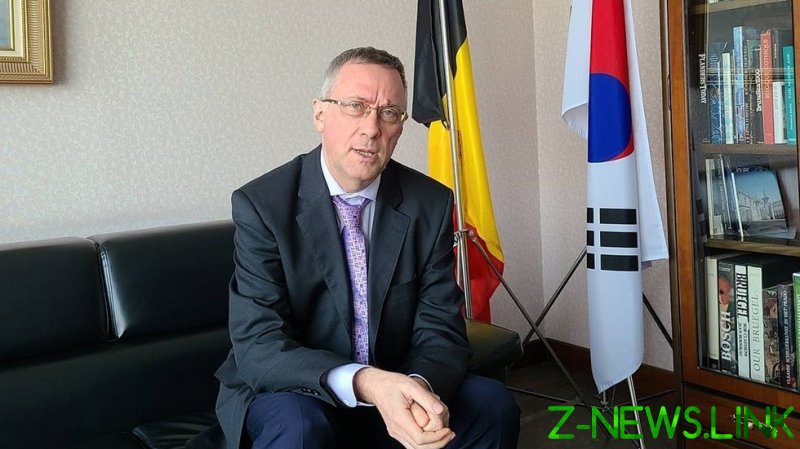 While the ministry told Politico on Wednesday that the circumstances of the dust-up “remain unclear,” Foreign Minister Sophie Wilmes said that after yet another incident, Ambassador Peter Lescouhier should “return to Belgium without further delay,” citing Brussels’ “desire to maintain excellent relations with the Republic of Korea.”

The move came soon after the ambassador’s wife, Xiang Xueqiu, was embroiled in an altercation with a street sweeper in a park in central Seoul on Monday. Police sources cited by Yonhap News said the fight erupted after the worker’s broom “touched Xiang,” after which the two reportedly “traded blows,” though neither combatant wanted to pursue action against the other when officers arrived at the scene.

The ambassador’s spouse was brought to a nearby hospital for treatment after she was shoved to the ground by the sweeper, while the worker later visited a police station to report that Xiang had slapped him, also seeking help to press charges. It remains unclear if a case was ever formally opened, however.

Xiang has apparently struggled to keep her hands to herself while in South Korea, slapping a shopkeeper and allegedly striking another store employee in the head in April after they suspected she might be stealing clothes. While their suspicions were mistaken and the case against Xiang was later dropped, the attack led the Foreign Ministry to cut Lescouhier’s tenure short, with Wilmes saying he could no longer “perform his function in a serene manner.”

Lescouhier was slated to return to Belgium in late July, but will now make the trip back early after his wife’s second tussle in the space of three months.

Seoul’s Foreign Ministry, meanwhile, offered only a brief comment on the incident during a press briefing this week, telling reporters that its current priority is to “verify facts,” and that it would “actively respond in cooperation with relevant agencies if need be.”