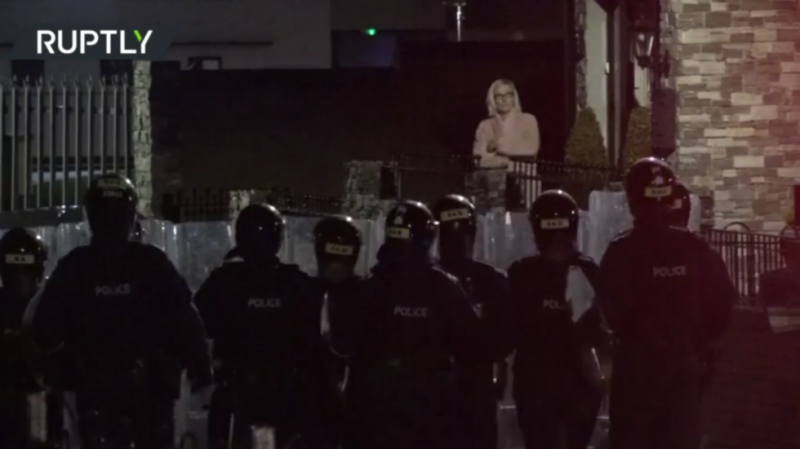 The disturbance in Belfast has entered its second week despite calls for peace and unity coming from political and religious leaders. More than 74 police officers have reportedly been injured during the unrest. It’s not clear how many protesters, if any, were hurt in the violence.

Clashes between the Police Service of Northern Ireland (PSNI) and violent protesters were reported on Friday at Tiger Bay, a loyalist area in north Belfast, as well as New Lodge, a nationalist area.

At one point, a police line was targeted with a car, which was set on fire and pushed towards the officers by demonstrators. A similar carjacking and torching tactic was used during a tense Wednesday night, when a bus was destroyed by protesters in west Belfast.

The PSNI used anti-riot armor and police dogs, and deployed water cannon to quell the unrest. The clashes went on despite calls from some politicians, like DUP representative Gavin Robinson, to suspend mass gatherings, including protests, due to the death of the Duke of Edinburgh.

The discontent in Northern Ireland turned violent last week. It was stirred by the post-Brexit status of Northern Ireland’s ambiguous status in Britain’s trade with the EU, which allows the union to tax goods coming across the Irish Sea. Unionists feel betrayed by the conditions of the deal, saying they undermine Northern Ireland’s identity.

Adding fuel to the fire was a decision not to prosecute members of the Irish republican Sinn Fein party for flouting Covid-19 restrictions during the funeral of controversial activist and prison-break organizer Bobby Storey last year.