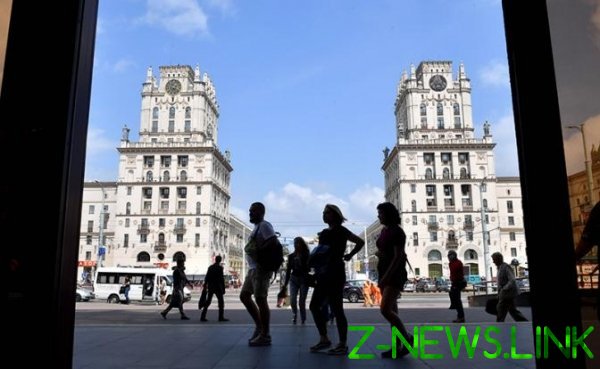 Disturbing for Moscow signal: the European Union (EU) for citizens of Belarus is becoming more attractive political and economic Union. What can be said about the Russia-led Eurasian economic Union (EAEU), which the Belarus and included. This is shown by the poll.

According to the study, the level of confidence in the European structure among the population is currently 51%. While about the credibility of the Eurasian Union voted only 48% of respondents. The gap seems to be insignificant. However, a year ago these figures were equal — 47%. So there is unpleasant to us drift and it seems to be the only reliable ally.

In addition, 36% of respondents gave the EU a positive rating. And 53% said they are neutral to it. In sum, it is already 89%. While the negative opinion is shared by only 10%.

Significantly increased (compared to 2018 — 12%) and the number of those who considers the relations of Minsk with the European Union good. This opinion is now 62% of survey participants.

Another very significant result: 37% of Belarusians said that they were aware of support programmes, which the European Union is having their country in the fields of culture, education and public life.

It is worth noting that a public opinion survey was conducted in the framework of the EU project “Eastern neighborhood of the EU”. Such surveys regularly (2016) are conducted in all countries of the Eastern partnership which includes Armenia, Azerbaijan, Belarus, Georgia, Moldova and Ukraine. With their help, the sociologists, the EU estimated the overall perception of the partner countries of European values, as well as exploring the preferred sources of information among the population, as they relate to the current situation in their country and their expectations of the future.

And it is hard not to notice that the Belarusians are more recently increasingly “looking” in the opposite of the Russian side. The same course should be long and Ukraine. Will you go the same route Belarus — until the issue… But according to European sociology, the supporters of rapprochement with Russia will be there soon in the minority.

— I would like to note that in Belarus all sociology, in addition to public, is prohibited — that is, no independent centers to carry out research in this area have no right, — commented the political scientist, the expert on Russian-Belarusian relations Dmitry Bolkunets. — So seriously, I would not trust such polls, although there is a definite trend.

In any case, the customer of this research, as we know from Europe. He clearly needed to show the dynamics in their favor. Otherwise it would mean that the “Eastern partnership” in Belarus failed.

But partly I understand the mood in the country, associated with an increase in positive perception of the activities of the European Union, compared with the EEU. It is rather a defect of the Eurasian economic Union. As an expert, for example, I don’t see any serious positioning of the EEU in the media. Including on the territory of Belarus. In the press there are negative evaluations. And some expect Moscow performance no.

Moreover, the EEU does not work with the expert community even in the countries of its activities. Work with civil society, in contrast to the “Eastern partnership” is also not conducted.

And in PR the Europeans clearly win. I have often observed: “Eastern partnership” opens a program on one million roubles. But the advertising around it — hundred million.

That is, there is a serious flaw and the Eurasian Union and the Union state, which Belarus and Russia are members. In this regard, I would like to note one more feature: two Belarusian city is located geographically on the border with Poland. So the citizens of our neighboring countries quite often travel to Europe. Where, of course, see how is the European Union. And many, obviously, my dream is to rise to this level. Do not rule out that there are certain expectations and somewhat glorified image that is formed by many Belarusians to the European Union.

When we talk about “soft power” the EU and the Russian Federation, the comparison is definitely not in our favor. Relatively speaking, that dancing in the headdress under the balalaika, as is now done by Rossotrudnichestvo, can hardly be considered “soft power”. In my opinion, is a banal formalism. But this, unfortunately (or fortunately for some) and is engaged mainly in the Russian foreign Ministry.

— You need to change the style of work. So Russia has positioned a positive, modern image. To demonstrate your best results. Indeed, in Belarus, for example, few people know about the achievements of Moscow in the field of information technology. In this respect, the Russian capital over the last several years have left far behind all the major European cities.

In Belarus, the citizens know nothing about it. Don’t know about many other things that should be paid attention to, people have formed a positive image of the Russian Federation. But no one, unfortunately, is not engaged.

The same applies to the track as an exchange student. Unfortunately, Belarus is the only country in Europe where the law does not allow dual diplomas. Naturally, this limits the choices available to Belarusian youth. They ceteris paribus go to study in neighboring Poland. There go to local universities. Then get the Polish scholarship and other benefits.

“SP”: — But here, apparently, requires a mutual desire not only in Moscow but also in Minsk. Isn’t it?

— Of course. Here next year — from 1 January 2020 to Belarus just assumed the chairmanship in the Eurasian economic Commission. Themselves the Belarusian authorities will be able to form a new image of the EEU. They constantly criticize the Eurasian Union. Now I can work on really creating a positive image of this integration structure.

The task is ambitious. Because now it is completely incomprehensible “monster” for business and for ordinary people. They don’t know what it is? Why is it necessary? In addition, when the head of state criticized the EEU, it is thus this very negative image creates and maintains.

At the same time remember that with the European Union Belarus has still not signed a basic cooperation agreement. We all have, and in Minsk — no.

See also:  Lutsenko has disclosed details of the extradition Kaskiv

Belarusian citizens are paying the high cost of visas to EU countries. And will pay even more if their government does not sign the agreement.

The Minister of foreign Affairs of Belarus Makey which is a simplified visa regime. But while all at level of oral statements. No serious progress in this matter Minsk no. And this, of course, creates a negative background for the European Union.

But politically I do not see any strong trends, indicating translation in Belarus arrows in the direction of the EU. Because the question arises: who will pay for this action? Who will support Belarus?

We know how serious subsidies from Moscow are in the energy sector of the Republic. The Russian market is open for Belarusian companies. But is the European Union ready to open its market for Belarusian goods? I’m not sure…

In addition, there is the example of Ukraine. We see how the Europeans opened its market to this country. How it eventually led to “catastrophic fall of the economy”. And to the fact that the labor force from Ukraine just ran in the Eastern EU countries. In Poland in the first place. Of course, Poland only won because Ukrainians don’t need to pay benefits and other social benefits to give.

If in the West the same way offer and Belarus, it is a road to nowhere. This is the path of self-destruction. It is obvious that Minsk needs as quickly as possible to restore relations with the EU, to develop and deepen them. But I don’t see that happening.

The main investor is the Russian Federation. All of the European investors in Belarus is not necessary. Because there are certain political risks and economical risks.

Yes, Lukashenko has removed the ban on entry into European countries. But often he goes there? He, like, said you can come. But there is no one waiting. It is also important to understand.

“SP”: — next week, on July 18, Vladimir Putin and Alexander Lukashenko will meet in St. Petersburg to, as previously stated, to discuss the integration process. Should I wait for a breakthrough from these talks?

— In fact, a meeting of leaders of Russia and Belarus dedicated to the Forum of the regions of the two countries, which will be held in the Northern capital. But I think conceptually it will discuss the future of the Union state.

This year marks the 20th anniversary of the signing of the Treaty establishing the Union state. There are expectations of leaders regarding what and how it will develop. But there are serious moments, including political and economic, that they should discuss.

So, of course, this meeting will be useful. But its results we will see in a few months, when it will be finally signed “road map” on development of the Union state. And when will outline a future of the two countries.

I think that these issues the presidents will discuss among themselves. Thus it is noticeable that Lukashenko is extremely dissatisfied with the proposals presented to the intergovernmental working group. So the conversation they have, apparently, will be difficult.