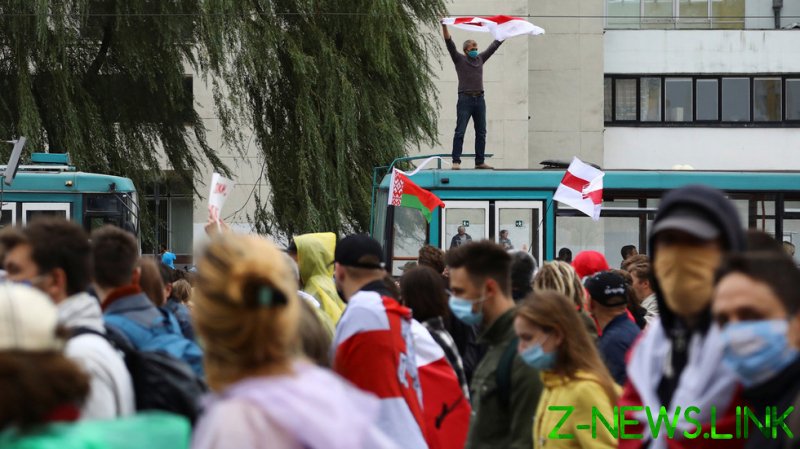 The action was called in response to the secret inauguration staged by long-time President Alexander Lukashenko for himself earlier this week. Tikhanovskaya won’t be attending the protest, as she fled Belarus for Lithuania after the August 9 election, which the opposition insists was rigged.

Thousands marched along Independence Avenue in Minsk, despite security forces thoroughly preparing for the unsanctioned event and urging people to stay at home. Mobile internet speed has been reduced in the capital. A local mobile operator said it has been ordered to do so by the government. It may have been done to complicate communication among demonstrators.

The city’s largest squares were blocked off, with seven subway stations in the center also shut down. A convoy of armored vehicles has also been spotted outside Lukashenko’s heavily guarded residence.

Music was played from loudspeakers along the route of the march to drown out the chants of the demonstrators, calling for Lukashenko’s immediate resignation and a new, fair election.

Police say that almost 200 people have been arrested in Minsk and other cities where protests took place on Sunday.

The protests in Belarus have been marred by mass arrests from the very start, with thousands of anti-government demonstrators detained in the weeks since the election. Police have also been accused of using excessive force against demonstrators and mistreating detainees. Three protesters have been killed during the unrest, according to official data, with hundreds, including many officers, wounded.