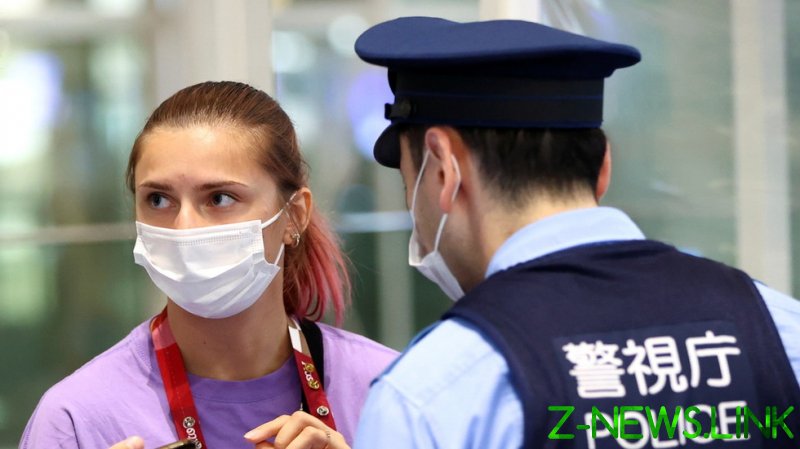 Timanovskaya, 24, had sought police protection at Haneda airport on Sunday after being booked onto a flight by Belarusian team officials.

The sprinter was due to take part in the 200m on Monday but was withdrawn after posting a video criticizing Belarusian Olympic officials on social media.

Timanovskaya had been critical after being entered into the 4x400m relay race because fellow Belarusian athletes were found to be ineligible, hitting out at what she claimed was incompetence by team officials.

Apparently angering her Olympic bosses, Timanovskaya says she was told to pack her bags on Sunday and head to the airport, but the athlete said she feared for her safety should she return to Belarus.

However, Belarusian Olympic officials said Timanovskaya was being removed from the team due to her “emotional and psychological condition.”

On Monday, International Olympic Committee (IOC) spokesman Mark Adams gave an update on Timanovskaya in which he confirmed she had spent the night at an airport hotel.

“She has assured us she is safe and secure. We are talking again to her this morning to understand what the next steps will be,” Adams said.

“We need to listen to her, find out what she wants and support her in her decision.”

Czech Foreign Minister Jakub Kulhanek tweeted: “The Czech Republic is ready to help. We are offering her a visa to enter the territory so that she can apply for international protection with us. Our embassy in Tokyo is also ready to help.”

Olympic hosts Japan have said they will ensure that Timanovskaya remains safe while they discuss the situation with the IOC.

Speaking at the weekend, Timanovskaya had spoken of her fear that she would be “put in jail” if she returned to her homeland.

“I am worried about my safety. And I think that at the moment it is not safe for me in Belarus,” she said.

“[They decided] I need to be eliminated from the Olympics and returned home because I interfere with the team’s performance.”

After being re-elected last year, longtime Belarusian leader Alexander Lukashenko has been accused of targeting athletes who criticize him or the state.

The Belarusian Sport Solidarity Foundation (BSSF), a group set up last August to help athletes, has been offering support to Timanovskaya.

The IOC had already banned President Lukashenko from attending this summer’s Games, while it also refused to recognize the election of his son Viktor as head of the country’s Olympic Committee.