Belarus is being used as ‘trampoline’ to attack Russia, Lukashenko tells RT, amid post-election crisis 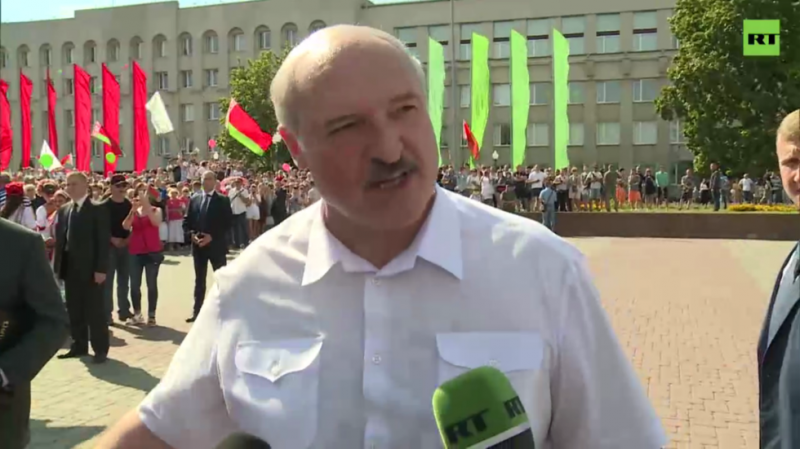 “In Russia, I often see the media saying: ‘Oh, in Belarus, in Belarus…’ But it’s happening right here, on the western border [of Russia],” Lukashenko told RT in the city of Grodno, where he spoke at a supporters’ rally on Saturday.

“We’re being pressured, hounded. Myself and Putin have agreed that they’re hounding us here to jump on Russia later. It’s a trampoline, and we must destroy it. It’s an opinion we share with President Putin,” Lukashenko said.

The Belarusian leader also said he had not attended pro-government rallies until now because his opponents were allegedly “preparing” to attack his supporters. “I was afraid that people would get hurt, so we took a pause. Maybe we hesitated for too long,” he said.

“I must thank my friend Putin, who also said: ‘Listen, why are you being silent?’ I told him: ‘You’ll hear me soon.’ Well, now you’ve heard me.”

Belarus has been grappling with large-scale anti-government protests after the opposition accused Lukashenko of rigging the vote in order to secure a sixth term in office on August 9. During the first few days in the wake of the election – which the official results say he won with 80 percent of vote – protesters were met with a tough police response and mass arrests. Supporters of the opposition candidate Svetlana Tikhanovskaya, who has fled to Lithuania after authorities uncovered an alleged attempt on her life, continue taking to the streets, while Lukashenko supporters have recently begun amassing at their own rallies.