Home / WORLD / Belarus border crisis isn’t a war, but it could become one

Belarus border crisis isn’t a war, but it could become one 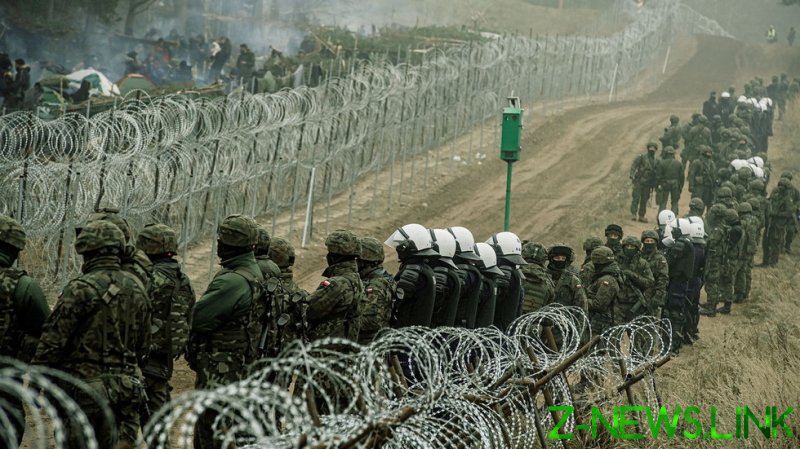 Yet, the Polish claims are made harder to verify because of the media blackout imposed on its side of the border, based on a legally dubious state of emergency. Moreover, Warsaw’s credibility is suffering from officials’ habit of making unfounded, sensationalist statements, including blaming the current crisis on Russia. They also clearly order or allow Polish forces to practice illegal pushbacks, as the UN High Commissioner for Refugees has pointed out.

Following a disappointing (but not surprising) “right or wrong, my bloc” logic, the EU has closed ranks and abstained from any criticism of Poland. But it has exerted pressure on several airlines it says are flying in desperate people from the Middle East, who are then encouraged to head to the border. Further sanctions have also been unveiled against Belarus, while the German Foreign Minister Heiko Maas has warned that there are more yet to be dished out. Now, consultations with NATO are even being brought into play.

The crisis has also turned into a litmus test. Beyond the obvious cruelties inflicted by Belarus’ authoritarian leader and the Polish nationalists in charge in Warsaw, it brings out the true colors of politicians and commentators, and, often, the result is ugly.

The list of moral and legal failures is long and growing. But two examples must suffice. The German chancellor-elect Olaf Scholz and Maas, for instance, are displaying their populism, cynicism, and disregard for international law.

It seems Maas cannot recall that the refugees on the Polish border retain their right to a proper assessment of their refugee claim, that is, to ask for asylum. The fact that Lukashenko is using them – or how they have arrived at the border – makes zero difference to this right. Clips posted online do appear to show Belarusian officers preventing them from reaching a checkpoint where Poland claims it is prepared to accept applications, turning them back to the border fence, but it is clear the EU could do far more to make that process happen.

Yet, like Brussels’ foreign policy chief Josep Borrell, Maas simply pretends that they can be sent back to where they came from summarily, without assessment case-by-case. That is legal and moral nihilism. If the German foreign minister really does not know any better, he is even more basically incompetent than he appeared during his devastating handling of Berlin’s role in the West’s retreat from Afghanistan. If he does know, then he is a cynic and populist.

The soon-to-be chancellor Scholz is no better: That he calls Lukashenko a dictator makes perfect sense. But it makes no sense to offer unconditional “solidarity” to Poland: Scholz feels that Germany has no right to even comment on Warsaw’s measures, including the building of a border wall. How convenient!

Yet in Berlin, such a display of faux humility is grotesque, especially from a man who as former finance minister never hesitated to impose German ideas on finance, economics, and, last but not least, how to evade taxes on the whole EU.

German humor, it turns out, exists. It’s bone dry and very dark. Precisely at a time when nationalist and increasingly undemocratic Poland tramples the rights of darker-skinned, mostly Muslim people who Germany does not want to have to deal with, Scholz gets all modest and too shy to even speak up. Slowest clap ever for your idea of “solidarity,” Olaf.

But individual cases are not the whole story. Instead, it’s time to address the muddled thinking and Orwellian newspeak that facilitates much of nationalist Poland’s and the EU’s brand of hypocrisy: the concept of “hybrid war,” with its terminological kin such as “hybrid attack.”

There are some cases where the term has made sense since its invention in the 2000s. Yet by now, it has been inflated to the point of being meaningless. What remains is an extremely fashionable, often propagandistic term that lures politicians and think-tankers into borderline indecent stampedes of group-think. It is sensationally dramatic because it features “war,” it sounds smart due to the “hybrid,” and it comes along with the air of a great, new discovery: war can take forms other than shooting. Oh my!

At the same time, “hybrid war” is conveniently vague and very versatile. NATO, for instance, defines “hybrid warfare” as “methods… such as propaganda, deception, sabotage and other non-military tactics.” Note the phrase “and other non-military tactics.” While things such as propaganda or sabotage are still fairly concrete, the added catch-all language opens the gate to redefining as some kind of war whatever you feel like being especially harsh about.

No wonder that by now, for the fans of the phrase, there is nothing – literally – that cannot be re-defined as a weapon. Sound like hyperbole? If only. It is, actually, Josep Borrell who has spoken of “a world in which everything can be turned into a weapon.”

Clearly, Borrell has an agenda. On the occasion of presenting Brussels’ new approach, ineptly called a “Strategic Compass,” he is seeking to mobilize governments and citizens by magnifying threats and stressing how badly prepared the EU is to meet them. In that last respect, he has a point.

But the fact that his badly hyperbolic talk raises no eyebrows is evidence of a larger shift in public perceptions and political rhetoric. Consider the following example: In 2016, at the height of American Russia Rage (aka the “Russiagate” delusion), Moscow was not simply – and wrongly – blamed for having made the megalomaniac real estate speculator Donald Trump president.

It was worse. For instance, in a fit of hysteria, Stephen Blank at the regrettably influential NATO lobby group Atlantic Council publicly fantasized that Russia was engaged in a “comprehensive, multidimensional war with the West” and urged the latter to “fight back.” Think about what we now know about “Russiagate,” namely that, in essence, it was a lie – and then shudder at what would have happened if the West as a whole had listened to such nonsense and really “fought back.”

That the loose talk of war, when there is none, can have real consequences is shown well by the Belarus-Poland/EU border crisis, too. Since it kicked off, in the summer, Warsaw has done everything it could to militarize its political and media framing, by making baseless claims about the Belarus-Russian Zapad-21 maneuver and bringing ever more regular troops – apart from border guards and police – into play. Unsurprisingly, Poland’s hardline Prime Minister Mateusz Morawiecki uses every chance to stage nationalist photo-ops in military-looking gear.

Britain, suffering from two self-inflicted fiascos, Brexit and the mishandling of the Covid pandemic, has had nothing better to do than grandstanding by sending a token contingent to the Polish border. Russia has answered with nuclear bomber overflights and paratrooper exercises in Belarus. None of this is in proportion to the actual problem at hand. It would be better if everyone stood down their militaries, at least. All they do is increase the risk of escalation.

Last but not least, it is of course the act of reframing human beings as “weapons” that has helped Poland and the EU treat them ruthlessly and without regard for their individual and inalienable rights.

It is now considered normal to recast every kind of pressure or conflict in terms of war. This is an extremely disturbing development. Because we are heading full-speed into a world where, under conditions of global warming and the ongoing transition to multipolarity, tension and conflict will only increase, at least for a while.

This is precisely the type of world where we should be extremely careful to distinguish between types of aggression that are not war – yes, even if they are unfair, challenging, or illegal – and those that really qualify as war. Otherwise we are at risk of stumbling into genuine war simply because we will be too confused by our own, inflated terms to realize when we still have a peace to preserve.

In short, next time you hear some politician or think-tank racketeer go on about “hybrid war,” ask yourself if what they are really talking about isn’t really just a bad peace. And then wonder if a bad peace isn’t still better than a real war.