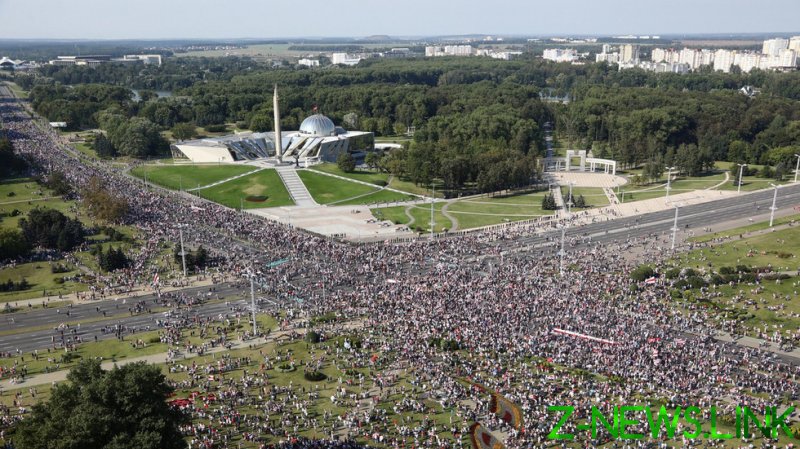 Crowds of protesters flocked to a spot near a war memorial in the Belarusian capital, gearing for a third massive Sunday rally in a row. They are demanding the resignation of President Alexander Lukashenko, who stands accused of rigging a recent election and of brutalizing members of the opposition. Similar events on two previous weekends attracted an estimated 100,000 participants each.

Meanwhile, police armored vehicles were deployed near the presidential residence, located just 1.5 km from the site of the protest. Some of the protesters marched towards the palace, but a police cordon stopped their advance.

Lukashenko has refused to yield to street pressure, saying the opposition activities had been orchestrated by foreign masterminds hostile to Belarus. Some Western governments expressed support for the opposition and denounced Lukashenko’s response to the protests.

Incidentally, the embattled president is celebrating his birthday on Sunday, when he turns 66.

The election, which, according to official results, Lukashenko won in a landslide, took place exactly three weeks ago, with protests starting on the day of the ballot. The government cracked down on the protests in a heavy-handed police action, which it later admitted to be excessive. The crackdown backfired, winning additional support for the opposition rather than discouraging further protests.

Sunday’s rally is happening a day after a smaller opposition march in Minsk escalated into scuffles with police officers, who tried to stop the column and ordered the activists to disperse. The confrontation was far less intensive than the worst clashes in the first week of the protest, but served as an uneasy reminder of the violence that occurred then.