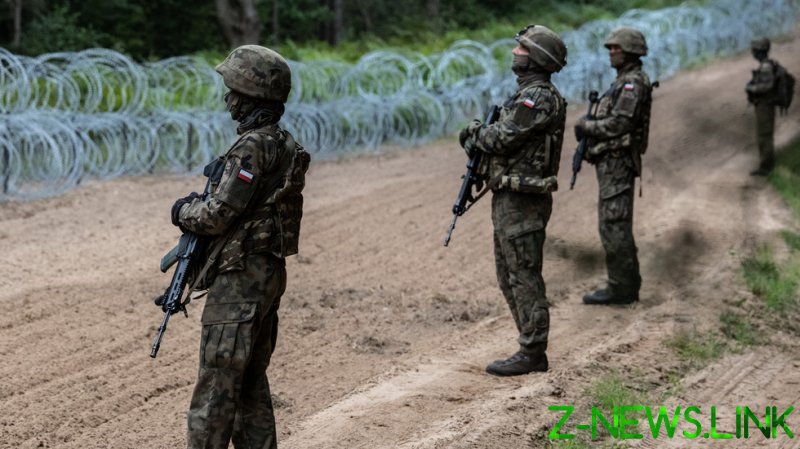 In a statement issued on Tuesday, the Belarusian Ministry of Defense rejected reports that its forces were encouraging thousands of would-be asylum seekers to attempt to cross into the EU country. Instead, Minsk’s officials said, the presence of 10,000 Polish servicemen on the shared frontier “represents significant military activity,” insisting that “carrying this out without notifying the Belarusian side is a violation of bilateral agreements on regional stability and security measures.”

Poland has put its troops on high alert with at least three brigades of the territorial army told they could be deployed to support border guards with just six hours notice. The day before, several large groups of migrants attempted to cross over the fortified border from Belarus, severing the barbed wire with bolt-cutters. However, authorities on the Polish side of the border blocked gaps with riot shields and deployed tear gas in an effort to turn back the crowds.

Warsaw alleges that the Belarusian state is actively aiding the would-be migrants in their efforts to storm the border, releasing videos that purport to show officers in plain clothes helping to dismantle the fence. The EU has accused Minsk of “weaponizing” the potential refugees, laying on flights from troubled destinations like Iraq and Iran, with several people understood to have died while sleeping rough near the border area. In recent months, the number of reported illegal crossings has skyrocketed, with Poland’s government signing off on the construction of a vast new frontier wall.

Brussels insists that the spike in asylum seekers is part of a campaign of “hybrid warfare” being waged by Belarus’ embattled leader, Alexander Lukashenko, in response to sanctions imposed on the country. The EU has been locked into an escalating standoff with the Eastern European nation since last summer’s presidential elections which the opposition, and many international observers, say was rigged in Lukashenko’s favor.

Minsk insists it is simply no longer prepared to prevent migrants reaching the border, and has moved to tear up previous agreements that required it to re-accept those deported from the EU for entering illegally. Videos shot on Monday showed one group of would-be asylum seekers chanting that they wish to reach Germany.

Earlier that day, the head of the European Commission, Ursula von der Leyen, called for fresh sanctions to be imposed on Belarus, which she insisted is “putting people’s lives at risk.” The top Brussels politician said that the EU would consider blacklisting airlines that are responsible for “human trafficking” by bringing people from war-torn Middle Eastern nations to Minsk.

The UN has previously criticized Poland’s handling of the crisis, with its refugee watchdog saying that “people fleeing war, violence and persecution need protection. Refusal to grant them entry at the border, without properly assessing their claims, is in dichotomy with the country’s obligations.”