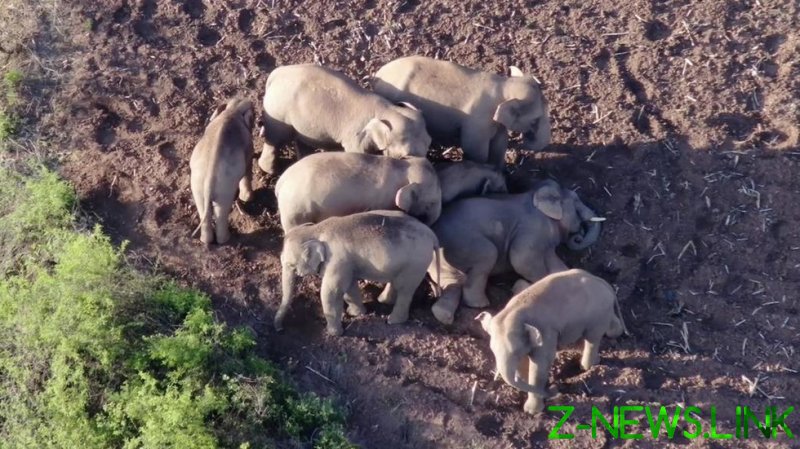 The story of more than a dozen elephants wandering hundreds of kilometers from their usual habitat while Chinese officials scramble to keep them away from major cities made its way across traditional and social media this month. While some see it as nothing more than a short-lived tale about majestic animals and clueless humans, a trained eye can apparently see something sinister behind it.

“The cuddly elephants are the latest weapon in President Xi Jinping’s propaganda offensive to present a more ‘lovable’ global image of China,” declared an article in the Sydney Morning Herald on Tuesday. “The elephants are just one manifestation of Beijing’s decade-long obsession with boosting what it calls its ‘discourse power.’”

There is no denying that Chinese media and officials have been appreciative of the global viral fame of the elephants and the surge of positive coverage of their country that it elicited. It probably felt like a welcome reprieve from being bombarded by constant accusations of pandemic cover-up, aggressive military behavior, espionage, financial coercion, genocide, and every other sin the Western media has accused Beijing of committing.

The proboscidean weaponization charge seems quite ironic, considering the newspaper that printed it also covered the story of the roaming elephants – as did what seems like every other news outlet on the planet.

The Herald’s typical China coverage is usually more in line with the Australian government’s combative stance towards its Pacific neighbor.

The latest article on the trekking elephants was penned by Louisa Lim, a former long-time China correspondent for the BBC and NPR. She co-authored a report on China’s global media strategy that was published by the International Federation of Journalists in May.

Lim follows the usual Western criticisms of Beijing, lamenting China’s growing soft power and its ability to counter negative narratives. Of particular concern to the author are Beijing’s Covid-19 publicity gains. It managed to rein in the infection at home and helped poorer nations deal with it through donations of protective equipment and vaccines, winning some goodwill in the process, she notes.

When it comes to the US and its allies, China’s image is already quite poor, according to findings published by the US’ Pew Research Center think tank last October. A whopping 81% of Australians had an unfavorable attitude towards China last year. The number seems to be a testament to how effective the critical coverage of China has been, especially since fewer than half of all Australians trust news they get from legacy outlets, according to a recent University of Oxford study.

Lim argued that this didn’t matter much, since it was the developing nations that Beijing was more successfully targeting with “propaganda” to “project its image as a responsible member of the international community.”

She ends her article with a gloomy warning that some of the countries that used the Chinese vaccine to immunize their people are now experiencing new outbreaks, without mentioning that some that used Western vaccines are reporting similar problems with fresh outbreaks as new variants spread.

“If China’s vaccines prove ineffective at combating Covid-19,” Lim concludes, “the cost will be in human tragedy, and all the cute elephant stories in the world will not be enough to uphold China’s lovable global image.”

By the same logic, every cuddly kangaroo story out there could be a secret ploy to whitewash the image of the Australian government, which has been tarnished by recent sex scandals, alleged war crimes, and a refusal to back US climate change plans.