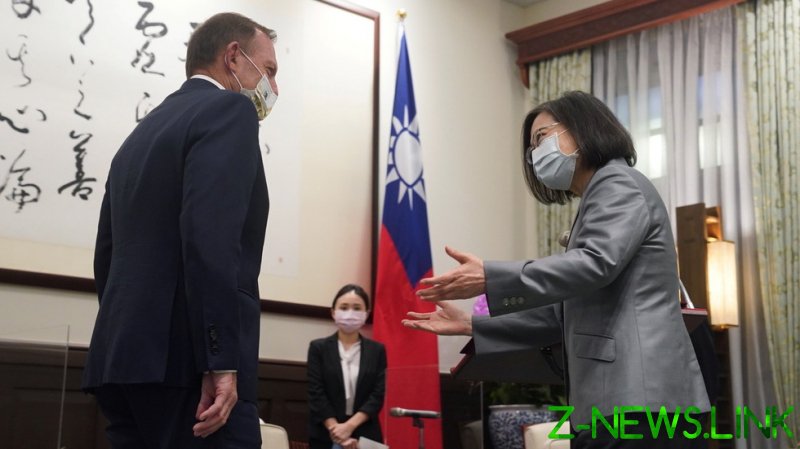 Tony Abbott, who headed the Australian government between 2013 and 2015, delivered a speech at a conference in Taipei on Friday, urging the international community to show “solidarity” with the island. Beijing considers Taiwan to be a part of its territory under its ‘One China’ policy and does not recognize its autonomy.

The former prime minister warned that any “any attempt at coercion would have incalculable consequences” for China. He went as far as to suggest that both Washington and Canberra would likely help Taiwan if a conflict escalates with the Chinese forces. “I don’t believe America could stand by and watch [Taiwan] swallowed up,” he said. “I don’t believe Australia would be indifferent to the fate of a fellow democracy of almost 25 million people.”

The visit was unofficial, with Abbott currently not occupying any roles in the government, but it didn’t go unnoticed in Beijing, which responded through its official English language paper, The Global Times.

In a fiery opinion piece published by the outlet earlier this week, the president of the Chinese Association of Australian Studies, Chen Hong, described the Australian political veteran’s arrival in Taipei as just one of many recent “acts of recklessness from Canberra” toward China.

Chen’s piece offered fresh criticism of Chinese military drills near Taiwan by the Australian government, which labeled them as “incursions,” and a September statement by the country’s Defense Minister Peter Dutton, who didn’t rule out a military confrontation with China in case of a war between Washington and Beijing. The Chinese authorities were also concerned with the Australian media providing a platform for Taiwanese pro-independent politicians to promote their agenda.

On the Taiwan question, Australia has been playing the role of a daring vanguard for the US, helping Washington test the regional waters to gauge China’s tolerance and test its responses.

The author especially singled out the AUKUS pact, signed between the US, UK and Australia last month with the goal of arming Canberra with state-of-the-art nuclear powered submarines. Australia “will become another chess piece in Washington’s anti-China strategy” after the subs are built in a decade or so, he wrote.

If Canberra continues with its “provocative actions” and decides to establish official ties with Taiwan or back the island’s participation in the Comprehensive and Progressive Agreement for Trans-Pacific Partnership (CPTPP), the bilateral relations between Beijing and Canberra could face a “cataclysmic upheaval,” Chen warned.

He recalled China’s spat with Lithuania in August, which saw Beijing recalling its ambassador and halting trade with the Baltic state in response to its decision to set up a diplomatic office in Taipei.

“Should Australia be so reckless as to challenge China’s sovereignty over Taiwan, there is absolutely no room for maneuver or diplomatic solution. Seismic changes could take place in the bilateral relations,” Chen insisted.

Taiwan has been self-governed since China’s civil war in 1949 ended with the Chinese nationalists fleeing to the island, located some 160 kilometers east of the mainland, and declaring it the Republic of China (ROC) in exile.

But Beijing, which views Taiwan as a breakaway province, has many times warned that the island’s continuing push for independence could result in a military conflict between the sides. The authorities in Taipei responded to the threat by expressing eagerness to defend themselves.

The US and its allies, like Australia, have been accused of actively using the Taiwanese card in an attempt to reduce Chinese influence in the Indo-Pacific. The White House has recognized Beijing as the one legitimate authority in China since 1979, but still maintains unofficial contacts with Taipei and supplies weapons to the island.