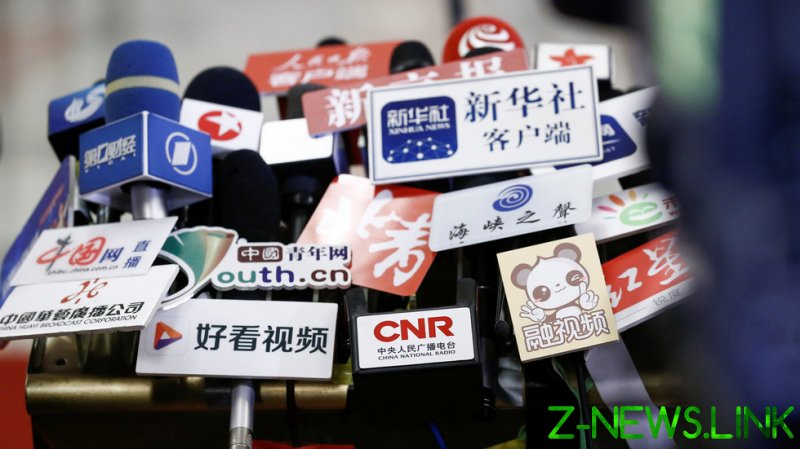 Secretary of State Mike Pompeo announced that the State Department would label six China-based media outlets that work in the US as foreign missions, which requires the organizations to identify its employees to the US government. The secretary of state claimed that the move would help to curtail Chinese propaganda.

“China will make a legitimate and necessary response,” he said, while urging the US to “change course” and reverse its “unreasonable restrictions” imposed on the Chinese outlets.

Pompeo’s decision brings the total number of Chinese outlets deemed to be foreign missions to 15.

The Trump administration has also threatened to withhold visas for some of the organizations’ employees, prompting Beijing to announce that it would reciprocate the measures when processing documents for American reporters in China.

In March, the State Department placed new limits on the number of journalists who could work in the US offices of Chinese media companies, lowering the cap from 160 to 100. Beijing retaliated by expelling correspondents working for the New York Times, the Wall Street Journal and the Washington Post.

After four other outlets were deemed foreign missions in June, the Communist Party-linked All-China Journalists Association torched the decision as a “brutal suppression” that would harm Chinese reporters’ ability to work in the US. The country’s Foreign Ministry also responded more directly, requiring US publications to provide the government with details about their staff and operations in China.

Beijing again promised retaliation in August, after Zhao Lijian said that no Chinese journalist had been granted a visa extension in the US since May, when Washington limited their stay to 90 days with an option of extension with government approval.

The burgeoning media war has steadily escalated amid a general spike in tensions between Washington and Beijing, largely driven by the Trump administration. The US rhetorical and policy offensive has seen ramped-up military operations in the South and East China Seas, boosted arms sales to Taiwan, and the targeting of Chinese tech firms – from ByteDance and Tencent to Huawei – with penalties and outright bans.