Home / WORLD / Beijing increases its defense budget as US eyes encircling China in battle for regional dominance. Welcome to the new arms race!

Beijing increases its defense budget as US eyes encircling China in battle for regional dominance. Welcome to the new arms race! 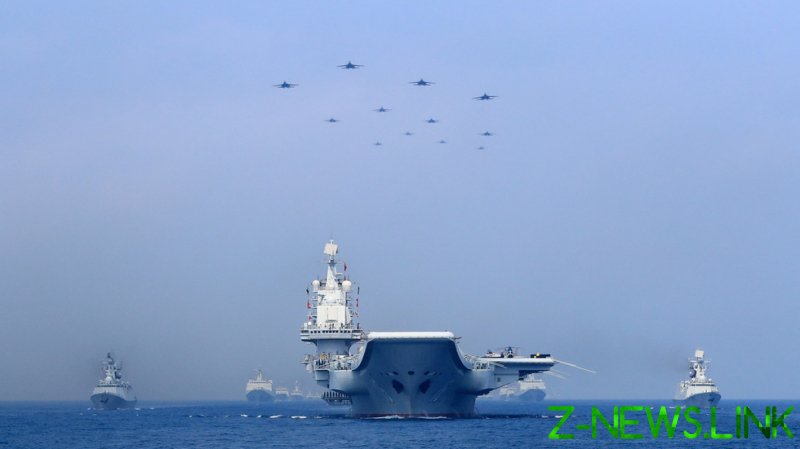 China’s governing party announced on Friday that it would be increasing the country’s annual defence spending by 6.8 percent – taking it up to a total of $280 billion – and affirming its strong opposition to “Taiwan separatism”.

Simultaneously, the US is reaching deep into its pockets in a bid to try and contain Beijing’s regional influence. American military leaders are reportedly looking for an extra $27.4 billion in funding to “establish a network of precision-strike missiles” along the “first island chain” – an archipelago stretching from the islands of Japan into the South China Sea.

The rush for armaments already adds to existing military tensions and muscle-flexing in the area, none of which have eased under the presidency of Joe Biden.

As the cornerstone of its “Indo-Pacific” strategy, Washington aims to sustain its own regional and global military supremacy by countering China’s rise with a strategy of military containment around its entire periphery, similar to its approach to Iran and Russia.

Although China is framed frequently as the “aggressor”, Beijing’s objective is far more modest than recognized. It is seeking to achieve security in its own backyard by achieving parity with the US – not on a global scale, but a local one. This ultimately brings the showdown to the question of the security of Taiwan and the aforementioned first island chain, which Washington fears could be undercut by China’s growing naval forces. The stage is now set for a prolonged showdown.

Throughout history, a common pattern of great powers has been to seek out security at home by creating a regional “safe space” around them, minimizing their military vulnerabilities from potential competitors and hostile nations, and thus allowing them to pursue their interests with impunity. The most famous example of this is the “Monroe Doctrine” – that is, the longstanding policy of the US to maintain undisputed dominance over the entire Western hemisphere and keep foreign competitors (beginning with Britain and France) out of it. This is why the US has been so aggressive towards Cuba, especially in the Cold War.

It might be noted that China desires, although less explicitly, something similar to a Monroe Doctrine of its own. Beijing is less interested in global dominance than in securing its own regional periphery from what it sees as a very obvious US effort to achieve encirclement. To the East are American troops in South Korea and Japan; on its doorstep is US-aligned Taiwan; to the Southeast sit the US-aligned Philippines (although it is increasingly pro-China); and to the Southwest is an increasingly pro-American India.

All around China are growing military liabilities. China’s thinking on foreign policy and military strategy is therefore focused on preventing this encirclement; thus the need to reach “parity” with America in a local capacity.

Key to this is of course the South and East China Seas. The Western media frame this as an “expansionist” activity or “aggression” by Beijing, but that is not the case. China claimed territory in both those maritime areas before the establishment of the PRC itself. What has changed are the stakes: Whoever dominates both seas militarily controls the strategic region termed above as the first island chain.

If China is to reach its goals here, it will be able to easily capture Taiwan and thus overwhelm the pinnacle of American power projection in this area – which in turn would lead to doubts about the Second Island Chain. The end result will be that China becomes the undisputed regional hegemon. It’s a make-or-break moment for Washington.

As a result, both sides are now raising their stakes in the region and investing more money and force in the growing military standoff. Beijing is expanding its navy and has also invested in artificial islands in the seas in order to expand its air-defence zones, aiming to establish an “area denial” against the United States Navy and Air Force and limiting its ability to defend Taiwan in a conflict scenario.

As China has the advantage of defending its home turf, the US is responding by amplifying its missile capabilities around the area. Washington’s goal would be to simply prevent China from dominating the area completely, which perhaps alludes to the reality that the balance of power is only shifting in one direction.

It might be noted that China’s actual military spending is still far behind that of the United States, both in overall and proportional terms. However, as it is not focused globally, it is able to concentrate it on one contest and pose problems.

As the race to invest more and more in the region heats up, this might also cause issues for the US elsewhere. Central questions for America are how it can keep up the pace against Russia in Europe – or Iran in the Middle East. Tough choices lie ahead for America’s global military commitments. This only goes to show that China is the biggest challenger and priority right now to US hegemony, and even if a formal conflict remains unlikely, this new arms race will arguably be, like the former Cold War, a marathon to see just how far each country is willing to go to maintain the balance of power. It’s game on.