Home / WORLD / Beheaded over a LIE? French teen whose story of schoolteacher & Prophet Mohammed cartoons led to his murder wasn’t even in class

Beheaded over a LIE? French teen whose story of schoolteacher & Prophet Mohammed cartoons led to his murder wasn’t even in class 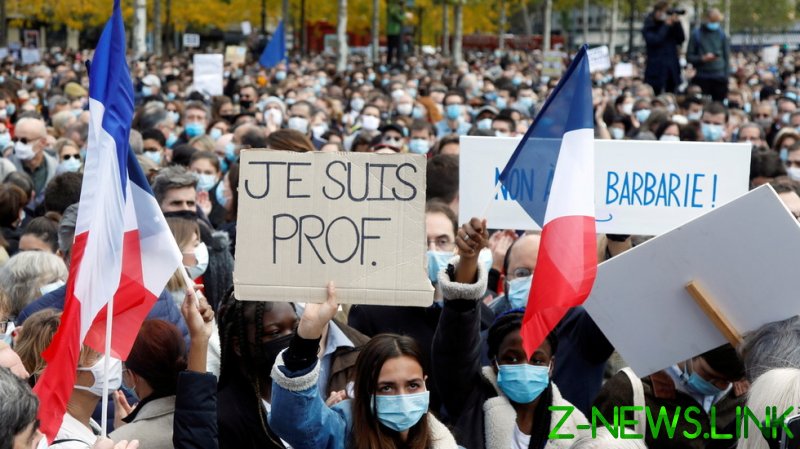 The unnamed 13-year-old girl, whose story was deemed offensive by many Muslims, effectively set off a chain of events leading to teacher Samuel Paty’s gruesome murder in October 2020, having apparently admitted to lying about being present in the controversial class, according to her lawyer.

The girl hadn’t even been at school in the Paris suburb on the day history and geography teacher Paty supposedly showed the obscene images to the class, her lawyer Mbeko Tabula told the AFP news agency on Monday. Her name has not been made public due to her age.

“She lied because she felt trapped in a spiral, as her classmates had asked her to be a spokesperson,” Tabula explained, without making it clear for whom or what she was supposed to be speaking.

The story, with all its controversial details, blew up after being shared on Facebook by her father. The reaction to the claims was swift and vicious. Paty soon began receiving death threats and was subject to a coordinated hate campaign by Islamic extremists both domestically and abroad, ultimately culminating in the 47-year-old’s murder by a complete stranger who had lived in France as a refugee after his Chechen family emigrated there.

The 18-year-old killer, Abdullakh Anzorov, allegedly paid several students to help him identify Paty, followed him as he walked out of the school, and murdered and beheaded him in a street nearby.

The girl’s bombshell confession first appeared as a report in Le Parisien on Sunday. The newspaper said the girl was not in the class because of her “bad behavior,” and suggested she was motivated to cover up her failure to attend classes so as not to upset her father.

The father not only filed a complaint with the police and submitted his grievances to the school administration in Conflans-Sainte-Honorine, but also launched the aforementioned hate campaign on social media, including a video detailing the supposed crimes of the teacher.

Anzorov may also have had contact with the 13-year-old’s father, according to police sources. Those sources suggested the Chechen Islamic extremist, whose half-sister had joined Islamic State in Syria, had spoken with the father over WhatsApp.

Paty’s killing set off belated efforts at enforcing seldom-used anti-radicalization laws already in place in France. Another student commented less than a month after the murder that he had somehow “deserved” it for “making fun of religion” – a comment that got the child expelled. By mid-December, the Ministry of National Education had reported 793 “incidents” during official tributes to Paty’s death. Some 131 students were subsequently suspended, and 44 expelled.

The shocking murder had a ripple effect outside France as well, with Norwegian teachers reporting they were afraid to show cartoons of the prophet, despite Norway supposedly being committed to free speech. Just eight percent of teachers polled in November said they would use caricature images of the Prophet Mohammed in their lessons, with 37 percent admitting they were “afraid of the consequences.” Over a third of Norwegian teachers who responded to the same poll admitted they habitually avoided bringing up issues of religion, sexuality, suicide, and other hot-button topics, suggesting self-censorship was the rule rather than the exception.

Anzorov’s brutal actions triggered a troubling wave of support from some young Muslim students. An 11-year-old child was sent home from their Berlin classroom in November after declaring it was “OK to kill someone who had “insulted the prophet,” and children as young as eight have come out with similarly shocking statements.

While French President Emmanuel Macron has vowed to crack down hard on Islamic extremism, many are concerned it’s too little, too late. Others have been concerned about the mixed messages being sent by the Western mainstream media when it comes to Islamist extremism: a headline of an AP story published in the wake of the murder, for instance, blamed France for “inciting anger in the Muslim world.”