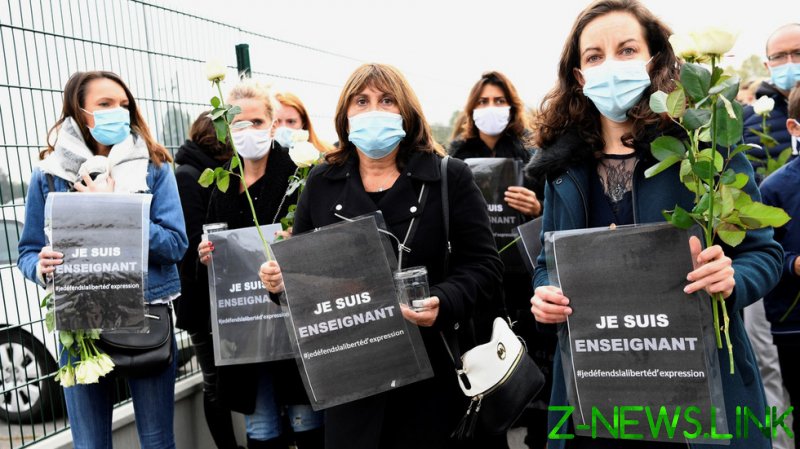 The original complaint was reportedly lodged by the father of a 13-year-old girl who studied at the school in Conflans-Sainte-Honorine, where Paty taught history and geography. He said in a Facebook video that the teacher had, at some time earlier this month, shown the class a caricature of a “naked man,” stating it was the “Muslim prophet.”

Before displaying the offensive imagery – widely believed to be a cartoon from the notorious Charlie Hebdo satirical magazine – the teacher asked Muslims to leave the classroom, the father claimed. His daughter and another Muslim boy refused to leave, however, and then took offense with the imagery, complaining to their parents. 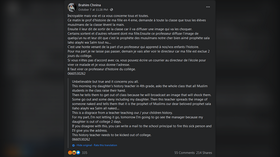 The girl’s father then called upon fellow Muslims to take action against the teacher and urged them to file complaints to the school to have Paty fired. While the original post did not contain Paty’s name, it had enough information to have the teacher easily identified.

The drive to have the teacher fired was backed by a local mosque, which shared the video address and urged followers to contact the father of the offended girl.

The post, which apparently did not include the teacher’s private details, has been taken down by the mosque after Paty’s murder, as it released a statement to condemn the beheading.

Samuel Paty was killed and beheaded in Conflans-Sainte-Honorine on Friday. The perpetrator, who has been identified as an 18-year-old man of Chechen origin, was gunned down by the police in the neighboring town of Eragny, after firing his handgun at the officers.

The murder suspect enjoyed refugee status in France and received a residence permit in March, a French anti-terrorism prosecutor said on Saturday.