‘Beginning’ of the end? Biden warns Cuba of looming torrent of sanctions 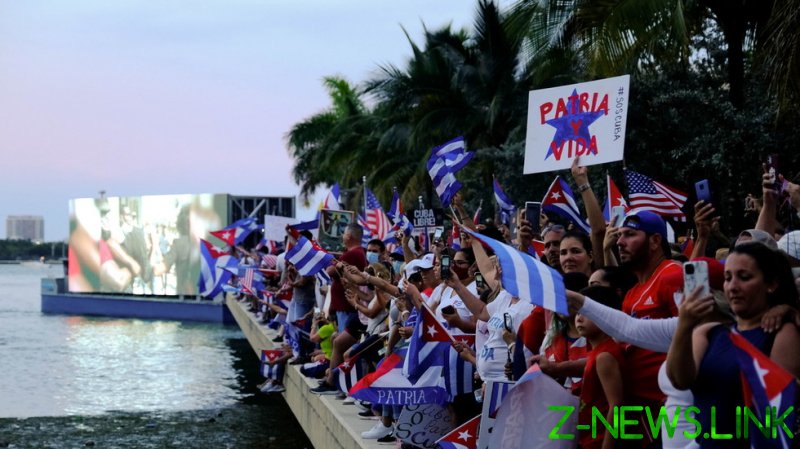 Biden has sanctioned the Cuban minister of defense Alvaro Lopez Miera and the “Boinas Negras” or black berets, a Special National Brigade within the Ministry of the Interior, citing their alleged role in repressing “peaceful, pro-democratic protests” starting July 11. The Biden administration warned it will continue to impose sanctions as punishment “to hold them accountable for their actions.”

“This is just the beginning – the United States will continue to sanction individuals responsible for oppression of the Cuban people,” Biden declared in an official announcement. The Cuban embassy has not responded in an official capacity as of Thursday afternoon.

Protests have reportedly taken place across some 40 cities in Cuba so far this month. The US response was organized Wednesday night, via conference call, in coordination with Cuban-American activists in Miami who had been “calling for more action ever since the July 11 uprisings on the island,” according to Politico.

It’s not clear which activists took part in the negotiations or what sort of political authority they actually have, if any, however. While the Biden administration claimed to have engaged “Cuban American activists and leaders,” at least one of these leaders, Sasha Tirador, has been investigated in the past for election fraud.

Miami’s Cuban-American mayor, Francis Suarez, had been urging the Biden administration to unleash airstrikes on Havana, suggesting the country “liberate” Cuba the way it had “liberated” Panama or Afghanistan or Yugoslavia, with a coup or maybe some “humanitarian” bombing.

The Biden administration’s Cuban liaisons even want to expand the Magnitsky Act, which – as Tirador gleefully put it – “will hold each individual who violates human rights on the island of Cuba accountable.” However, Cuban-American Senator Marco Rubio (R-Florida) poured cold water on Biden’s muscle-flexing by noting that most Cuban officials are already under sanctions. Indeed, the whole country is under an embargo, and sanctions won’t deliver the usual punch.

Rubio suggested Biden could restore the internet to the Cuban people, deploying high altitude balloons – though the utility of the plan was deemed questionable, as others brainstormed more workable possibilities for reestablishing an internet connection to the island. Onlookers were less than enthusiastic about Biden’s special plan to free Cuba, though.

Journalist Glenn Greenwald appeared to compare the likely outcome to the blood left on Washington’s hands following the Arab Spring, after Biden tweeted his condemnation of “mass detentions and sham trials that are the Cuban regime’s efforts to threaten the Cuban people into silence,” hinting that such behavior was more in line with US allies like Riyadh than Havana.

PressTV correspondent Wyatt Reed noted a disparity between US ally Colombia, where millions had hit the street in protest, and Cuba, where the protesters numbered in the thousands. Reminding US media that Cuban police hadn’t killed any protesters – only to be be sanctioned for their restraint – he pointed out that Colombia had reportedly killed at least 44, adding that the violence was not only ongoing but had been blithely overlooked by the US, which didn’t seem to take offense at the deaths of the protesters at all.

A handful of US Republican pundits even showed up in Miami’s Little Havana neighborhood to goad Biden into action. Fox News’ Sean Hannity devoted his hour-long show on Wednesday night entirely to the Cuban protests. It featured Rubio, Florida Governor Ron DeSantis, and Rep. Maria Elvira Salazar (R-Florida) as Hannity wondered aloud whether Biden’s “doctrine” was “to kiss the ass of every single, solitary dictator in the world.”

While Cuba had not been a foreign policy priority when Biden took office, the US president knows better than to let a good crisis go to waste. Despite a slow start, Biden last week declared Cuba a “failed state” and communism a “failed system.” The president also wants to dump piles of coronavirus vaccines on Havana, even though the country has developed several shots of its own.