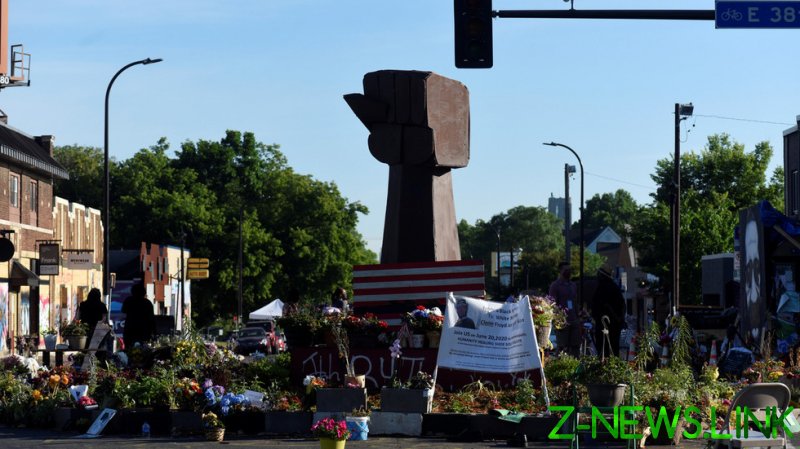 The events, scheduled at the State Department, Environmental Protection Agency (EPA) and Veterans’ Administration (VA) in open defiance of a White House memo banning them, are going to deal with “racial equity,” “white fragility” and “microaggressions,” Rufo tweeted on Monday, publishing photos of the training slides he somehow obtained.

The State Department is embarking on a “21-Day Racial Equity Habit Building Challenge,” in which employees will be asked to make pledges to racial equity, challenge “institutionalized/systemic racism, colonization, and white supremacy,” become a “co-resistor” against “oppressive institutions,” and “transfer the benefits of their privilege to those who have less,” according to the documents.

Foggy Bottomis also providing “emotional validation” to riots over the death of George Floyd, quoting the African proverb of dubious provenance about a child not embraced by the village burning it down to feel warm – in a presentation slide that appears to justify looting while not “endorsing” it.

Other lessons in the challenge include watching videos on “The Psychology of Black Hair” and “Becoming An Ally to Indigenous People.”

Meanwhile, the EPA is hosting part two of the seminar titled “Race, Resilience, and the Role of Being an Ally,” including conversations about “allyship, anti-racism, white fragility, microaggressions, white privilege, and systemic racism.”

The VA had also scheduled a “Race Café” at its office in West Palm Beach, Florida –  demanding an “equity pledge” from the attending executives – until it was abruptly canceled on Monday, following Rufo’s revelations.

Rufo has previously documented the content of “diversity” and “anti-racism” workshops being conducted at the Treasury Department and the FBI. Whistleblowers have also pointed to the existence of such seminars in the US Army, while the Smithsonian Museum of African-American History and Culture actually had a critical race theory section on its website, but removed it after public uproar.

Earlier this month, the White House Office of Management and Budget (OMB) explicitly ordered all federal agencies to stop paying for seminars on “critical race theory, white privilege, or any other training or propaganda effort that teaches or suggests either (1) that the United States is an inherently racist or evil country or (2) that any race or ethnicity is inherently racist or evil.”

The State Department, EPA and VA actions appear to directly contravene this instruction, sent out by OMB Director Russell Vought.