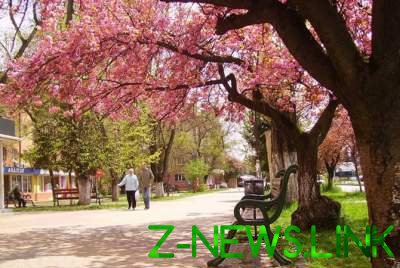 When is the peak of flowering.

After a week the Carpathians begin to be covered by a “blanket” of soft pink petals of Sakura. This was stated by the expert in the Transcarpathian tourism Maksim Adamenko in Facebook.

“After a week in the Carpathians bloom Sakura! Peak flowering is expected in the period 15-20 April,” – said Adamenko.

He also noted that 2018 Mukachevo was declared the capital of sakuras in Transcarpathia.

See also:  It became known in what regions of Russia the worst salary

“Why? Because in Mukachevo growing, “a furious Sakura” which blooms first of the year. On the streets of the city planted over 1000 of young and old cherry trees, in Mukachevo is the longest in the Carpathians (over 1300 m) street with Sakura and there are the oldest cherry blossom field, planted by the Czechs in 1926,” wrote Adamenko.

See also:  Became known why a free concert of "Okean Elzy" in Kiev will not take place. Video

Another highlight sakuraoka Mukachevo, according to Adamenko, – on Filatov street in the city grow “binary cherry” wood, the trunk of which is grafted Japanese and local cherries, so they bloom and pink and white at the same time.