Home / Society / Became known, when in Kiev it will snow

Became known, when in Kiev it will snow 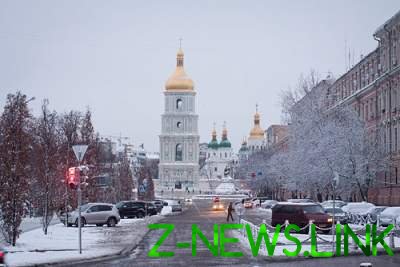 It is expected that this winter in the Ukrainian capital will come in a few days.

The wind and sleet are expected in the capital on October 30. This was reported by the press service of the Ukrgidromettsentra.

“On 30 October in the capital are expected severe weather conditions. In particular, strengthening of a wind of 17-22 m/s, night gusts 25 m/s, with occasional rain with sleet in transition”, – stated in the message.

Earlier it was reported that over the weekend, Ukraine will face difficult weather conditions.

Saturday, October 28, in Ukraine will be humid and warm air mass from the West of Europe. Occasionally rain is expected in the Carpathian mountains – with sleet in Eastern and Central regions and in the Azov sea, sometimes a strong rain. Night and morning on the left Bank of fog in places.

In Kiev, occasional light rain. The temperature in the afternoon +7…+9.

On 29 October in the Western regions, on the night of 30 October in the Northern, Vinnitsa and Cherkasy regions of 25-30 m/s , in the Carpathians up to 40 m/s. Everywhere rain is expected.

Also according to forecasters, deterioration of weather in the East.