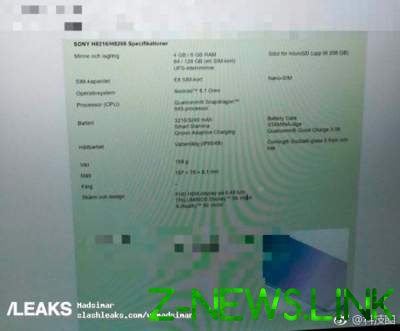 The previous week became known to all phone features Sony H8216. Leaked image, which appeared today, shows that the upcoming mobile phone Sony H8266 will be a more expensive version of the Sony H8216.

In addition, Sony H8216 will be powered by a battery capacity 3120 mAh battery, whereas H8266 will receive slightly larger battery capacity of 3240 mAh. In Sony H8216/H8266 appears functions related to battery, such as Smart Stamina, Qnovo adaptive charging, Battery Care, an endurance mode and a Quick Charge 3.0. Both phones will be running Android 8.1 Oreo.

Sony H8216/H8266 will have 5,48 inch Triluminos display with image processing X-Reality, protection Corning Gorilla Glass 5 and a resolution of FullHD. The size will be 157 x 78 x 8.1 mm and weighs 159 grams. The corps will receive the protection rating of IP68.