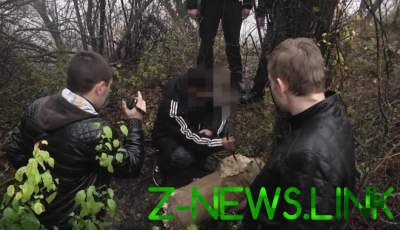 The police have shown investigative experiment.

If the suspect’s guilt is proved, he faces a sentence of up to life imprisonment.

Law enforcement officers told the details of the shocking murder of a child near Kharkov. We will remind, on Saturday evening, security forces reported the arrest of a mentally ill 49-year-old man, who in a cemetery in the village of Velykyi Burluk stabbed 8-year-old boy, inflicting 32 stab. As it turned out, the killer has decided that the child claims on food and drinks that people leave in the graveyard.

As told the head of the investigation Department Sergey Chizh, the boy’s body was found October 27. Killed was a student of second grade of the local school, which is still 3 Sep left home and went missing. The child was able to identify very quickly because he was dressed in shorts and a t-shirt that was mentioned in the Bolo. Soon, the security forces managed to detain the suspect – a man who was engaged in that collected from the graves of food and drinks.

As it turned out, that day the attacker saw in the cemetery of the child, which was also collected from the graves of candy. The man saw the child as a competitor, and then fed him alcohol, and then struck the child about 34 times with a knife in the back. After the killer coming in every day to the cemetery and looked at the victim’s body.

In the course of the play the man showed police the place where the murder occurred, as well as the way of strikes. Open criminal proceedings under article 115 UK of Ukraine (“premeditated murder of the juvenile child”).

If the suspect’s guilt is proved, he faces a sentence of up to life imprisonment.