Home / WORLD / ‘Beacon of hope’: A look inside the Russia-Ukraine grain deal

‘Beacon of hope’: A look inside the Russia-Ukraine grain deal 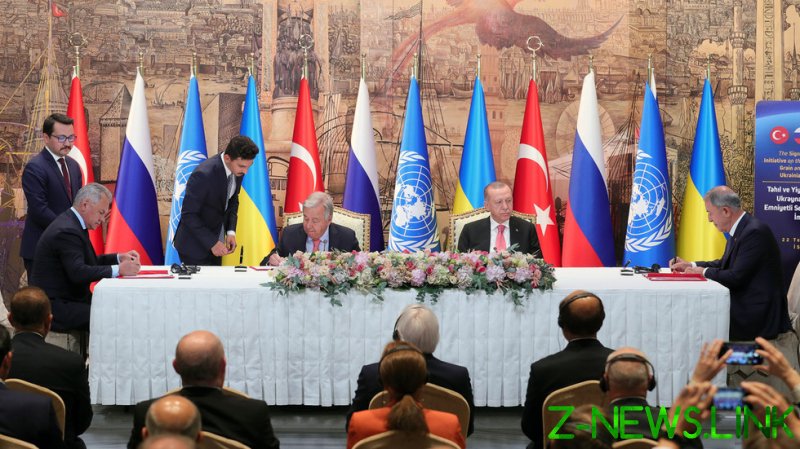 Russian and Ukrainian officials on Friday individually signed a UN and Turkey-brokered deal for the resumption of grain shipments from Black Sea ports to world markets. The agreement, which has been described in a tweet by UN Secretary-General Antonio Guterres as “a beacon of hope, possibility & relief,” consists of two documents.

According to Guterres, the deal “will help avoid a food shortage catastrophe for millions worldwide.” Here, we take a look at some key provisions in the much-anticipated agreement.

The memorandum assigns the UN the task of ensuring restrictions on the export of Russian agricultural products and fertilizers are lifted.

“It is, in particular, about removing the obstacles that the US and the EU have created in the areas of finance, insurance, and logistics, to achieve specific exemptions for these products from the restrictive measures imposed against our country,” Russian Foreign Minister Sergey Lavrov said in a statement. He was pleased that Washington and Brussels had “stopped obstructing the achievement of today’s agreements” and added that signing the memorandum displays the “purely artificial character of the West’s attempts to shift the blame on Russia for problems with the supply of grain to world markets.”

Security guarantees for the ships

Dry cargo ships have been provided with security guarantees and will now be allowed to leave the ports. Grain-carrying vessels will not have a military escort, but the parties to the deal pledged not to attack them.

The deal provides for the creation of safety corridors from Odessa, as well as Chornomorsk and Yuzhny. Ships will navigate through these corridors in the Black Sea under the direction of Ukrainian pilots, and then pass through the Bosphorus Strait.

An inspection of all grain-carrying ships will be carried out by Russian, Ukrainian, and Turkish officials at the ports chosen by Ankara in order to prevent the smuggling of weapons and ammunition.

The deal mandates the immediate creation of a Joint Coordination Center, which will be based in Istanbul and will include representatives from Ukraine, Russia, and Turkey. The center will supervise the safe passage of ships along the agreed corridors.

Russia and the UN will create a mechanism for the exchange of information on the export of products and fertilizers through the country’s permanent mission to the organization.