Home / WORLD / Be careful what you wish for: Biden will do whatever he’s told, even if it gets him kicked out of the Oval Office

Be careful what you wish for: Biden will do whatever he’s told, even if it gets him kicked out of the Oval Office 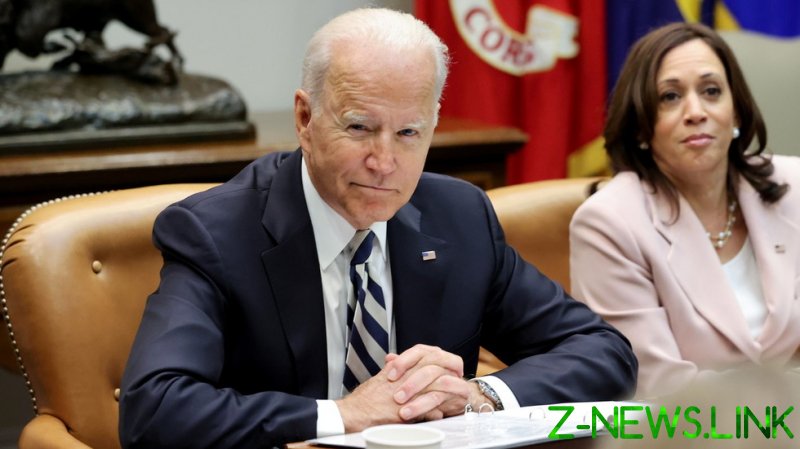 Multiple polls indicate a minority of Americans believe Biden is really running the show at 1600 Pennsylvania Avenue. Many seem to think Vice President Kamala Harris is the real power behind the throne, or that some combination of the State Department and National Security Adviser, a Kissinger-style Deep State, is actually calling the shots.

One problem with analyzing the behavior of such a president is that it’s hard to tell where his actions (or inactions) begin and where his puppetmasters’ might end. The New York Times on Tuesday praised Biden for staying away from “unpopular” spending plans, even though the president has effectively spent more of Americans’ money in less than a year than most previous presidential administrations put together. Where it concluded that such spending was “popular” isn’t clear – indeed, the Times ultimately admitted the blandly positive poll data it was using “signal[ed] a fundamental lack of public controversy around the proposals to this point” – i.e. the pollsters were asking questions guaranteed to deliver a thumbs-up for Joe Biden rather than an approximation of the popular opinion.

In its glib praise for the president, the Times congratulated Biden for refusing to be tempted by…healthcare reform (i.e. Medicare for All), the one issue on which he opted not to spread Americans’ taxes around. One of the most popular issues among Democratic voters, Medicare for All isn’t necessarily reviled by conservatives either, especially after the coronavirus pandemic stripped millions of Americans of their health insurance when they lost their jobs.

Medicare for All is vocally supported by half the House Democratic Caucus and hundreds of unions, professional organizations, and other workers’ coalitions. The most recent version was introduced to the House by Rep. Pramila Jayapal in March and should, in theory, have no trouble sailing through a Democrat-controlled House. Biden would gain the progressive support he’s never really had, and the half-million Americans who go bankrupt due to medical bills every year would get a new lease on life and an unlikely hero in the neoliberal Biden. Surely, Biden – or whoever’s advising him – can see this as a win which would burnish his floundering image?

Yet the policy is being snubbed, and the Times is making it clear that it will continue to be snubbed. With single-issue anodyne polls giving Biden a moderate advantage (over nobody, as the poll does not compare him to any opponent, hypothetical or otherwise), the president may think he’s doing just fine, but calling the frenetic money-printing and menacing inflation at the Federal Reserve a “good” economy – as a YouGov survey from Monday claimed 45% of respondents did – sounds like someone’s having some fun at Biden’s expense.

A little over a third of Americans believe Biden is actually performing the duties of president, according to a poll conducted earlier this month by the Trafalgar Group. That includes nearly a third of Democrats, and a dismal 11% of Republicans, while just a quarter of independents (who, the narrative managers hope you’ll forget, are more numerous than Democrats or Republicans) agree. Just over a fifth of young people – those under age 24 – believe he’s “fully executing the duties of his office,” a statistic that doesn’t bode well given that the Democratic Party has previously relied on the youth vote to survive, repeatedly conning debt-burdened college students into casting their vote for deep-pocketed good ol’ boys as if the two demographics overlapped.

It’s not just Biden’s kicked-dog delivery, or his news appearances in which he self-admonishes (“I’m going to get in trouble!”). Fourteen Republican lawmakers have called for him to take a cognitive fitness test, a move which could normally be put aside as political theatre, given the party dynamics – indeed, his predecessor Donald Trump faced the same challenge. However, half the country was questioning Biden’s mental fitness back in March according to a Rasmussen poll, observing his refusal to take direct questions from reporters among other issues. As the oldest man to ever sit in the Oval Office, it’s not unreasonable to at least raise questions about Biden’s faculties and, if anything, the knee-jerk rush to his defense only makes things more suspect.

Biden certainly hasn’t helped such perceptions, making controversial pronouncements of the type any president might make only to have to walk them back, seemingly having overstepped a mark laid down by…someone. On Monday, he lamented that Facebook was “killing people” by permitting anti-vaccine “misinformation” to proliferate on the platform, a talking point he has returned to repeatedly as part of his push for more social media censorship. The only problem? His administration and Facebook seemed to have already settled their differences, applying a scarlet letter to 12 accounts his administration has blamed for 65% of the “anti-vaccine” content on the platform. Biden revised his accusation – Facebook wasn’t killing people, it was just filling their heads with wrongthink – and establishment pundits did their best to clean up after the president.

If all it takes to present Biden’s docility as bold action is a limp Times profile in which the man is praised for dodging the issue of Medicare for All – a matter that tops many Democrats’ lists regarding a policy ‘must’ – it’s questionable how long the narrative managers really want Biden around. The aftermath of the coronavirus’ fiscal bloodshed is perhaps the only time Medicare for All might attract significant interest from conservative voters; with millions out of work – and thus uninsured – thanks to the Covid-19 shutdowns, Americans of all political stripes have been placed in the same sinking ship, and Biden could make a lot of friends if he were to bring the country together over such a broadly appealing issue.

Yet Biden has not only pledged to veto Medicare for All if it comes across his desk, but his lieutenants in the House and Senate won’t even utter the policy’s name, as if it’s cursed. “Biden may have found a way to skirt an ideologically divisive fight” (as the Times says) by assuming Washington’s favorite yoga pose, the “doormat,” but it’s unlikely this will win him any support from the progressives who still have a sour taste in their mouths over voting for him in 2020. The only question that lingers is whether it’s Biden who’s shunning healthcare reform, or someone else in his office angling for their turn in the big chair. Kamala? Is that you?