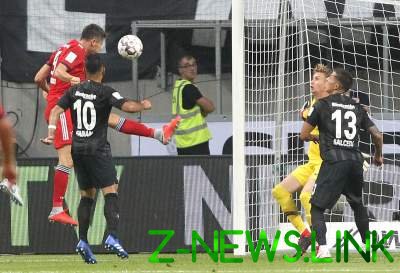 The new football season in Germany, Bayern have opened up a devastating victory over the “Eintracht”.

Revenge for the sensational defeat of Eintracht Frankfurt in the German Cup final was given the “Bavaria” is very easy. Debut in an official match under the leadership of Nico Cofavic Grand from Munich shipped in the opponent’s five unanswered goals.

The intrigue was killed in the middle of the first half when Lewandowski every five minutes double-headed canopies Kimmich and Robben. After the break, Lewandowski scored on a one-on-one and scored a hat-trick, and indecent account brought Koman and Thiago Alcantara.

See also:  Hockey: Donbass in the final of the playoffs

Bayern became the first club to win the German super Cup three times in a row. “Red” in the seventh time has won the Supercup and away from “Borussia” D, which has five titles.