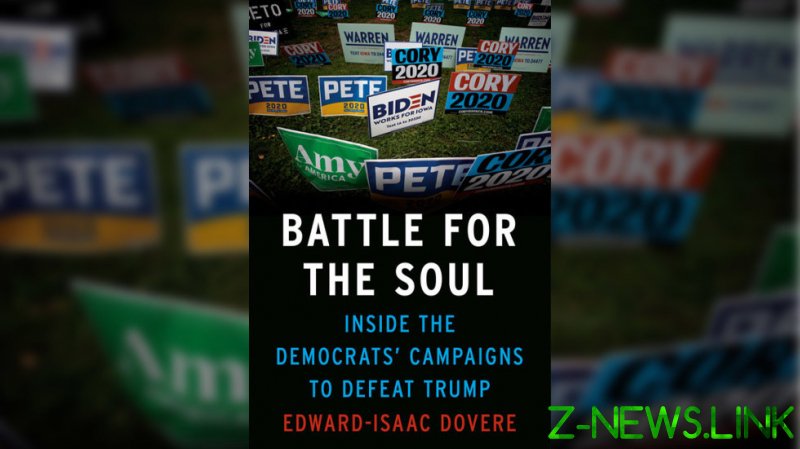 In ‘The Art of War’, the Chinese philosopher Sun Tzu’s classic treatise on military strategy, the matter of insight is raised thus:

In a newly published book, ‘Battle for the Soul: Inside the Democrat’s Campaigns to Defeat Trump’, Edward-Isaac Dovere, an award-winning political writer for the Atlantic, sets off to tell the story of how the Democratic Party overcame the political disaster of the 2016 presidential election, which saw Hillary Clinton lose the White House to Donald Trump, and went on to victory four years later, putting Joe Biden in the Oval Office.

While the book delivers some fascinating insider tidbits such as former President Barack Obama’s scathing opining on Trump, calling the 45th president a “madman,” “lunatic,” a “racist, sexist pig” and worse, what it doesn’t do is demonstrate an ability to go beyond a pro-Democratic Party narrative and deliver the kind of insightful analysis that would lead a reader to conclude that Biden’s electoral victory in 2020 was the byproduct of anything other than a collective knee-jerk rejection of one of the most divisive presidents in US history.

Once the purview of old-school power plays, where opposing political machines competed for the favor of the established elite, American politics witnessed a transition to modern mainstream political insurgency in 1992 when the presidential campaign of William Jefferson Clinton created what was called “the War Room.” This was a rapid-response operations center designed to flip traditional political campaigning on its head. Since that time, the notion of American politics as a form of ideological combat has taken root in the American psyche, making Sun Tzu’s admonition on the importance of insight into the self and the enemy even more important. But if one is looking for that kind of insight here, Dovere’s book disappoints.

The cover of ‘Battle for the Soul’ betrays the greatest flaw in the book – its failure to appreciate the role played by Bernie Sanders in both the 2016 and 2020 elections, and the fact that, devoid of the direct intervention by the Democratic Party on both occasions, Sanders would have won the Democratic nomination and, most likely, the presidency. The plethora of Democratic candidates are presented in a photo montage showing the various lawn placards bearing their respective names, save one – Sanders.

Whether this oversight was deliberate, or simply indicative of the ongoing denigration of the political insurgency created by Sanders, is not known. What is known is that Dovere treats the Sanders phenomena as mere fodder for his pro-Biden narrative. It takes an astute reader to piece together the intervention of South Carolina Democrat James Clyburn on the side of Biden, which precipitated the withdrawal and subsequent pro-Biden endorsements by Pete Buttigieg and Amy Klobuchar, and Elizabeth Warren’s decision to stay in the race, to understand how these political machinations cost Sanders the Democratic nomination. Biden did not win because he was the better candidate – he won because he was the establishment’s candidate.

Dovere’s book tries to sell the reader on the notion that Biden’s 2020 victory was the result of him winning the battle of ideas – the proverbial “battle for the soul,” a take on Biden’s acceptance speech at the Democratic National Convention in August 2020, in which he called the upcoming election a “battle for the soul of the nation.” But perhaps Elizabeth Warren had a better insight into the true nature of this “battle.” Dovere quotes her as acknowledging Biden’s turn of phrase, with a twist – “It’s the battle for the survival of a nation that works for most of its people, or only for a thin elite at the top.” The Democrats did not prevail at the polls in 2020 because they had better ideas. They won because they rallied the American establishment against the agent of chaos who had occupied the White House the previous four years.

If the “battle for the soul” was about ideas, then the Trump phenomenon would be over. But the forces that propelled Donald Trump into the White House in 2016, and which fought to keep him there in 2020, were representative of the kind of political insurgency that propelled Bill Clinton to victory in 1992. The ideology of change – real change, not the politicized rhetorical device embraced by Barack Obama in his 2008 campaign – had emerged as a political reality by the end of Obama’s second term.

As Donald Trump famously tweeted, “Somebody please explain to @MichelleObama that Donald J. Trump would not be here, in the beautiful White House, if it weren’t for the job done by your husband, Barack Obama.” Trump was successful because he was able to capitalize on this desire for change in a way that the Republican Party was not able to counter. Sanders did the same on the Democratic side but was outflanked by a Democratic establishment that rallied before Sanders could seal the deal with voters.

Dovere’s book fails to capture the visceral political reality of the movement that made Sanders a viable candidate, which propelled Donald Trump past Hillary Clinton in 2016, and mobilized some 75 million Trump voters in 2020. “The battle for the soul” is about the struggle between the enfranchised and the disenfranchised in America, a reality that Dovere’s partisan book fails to capture.

The political forces that made both Sanders and Trump still exist today, unbent and unbroken by Biden’s electoral victory in November 2020. The political struggle between these two forces continues well past the 100-day mark of the Biden presidency, with the Democratic establishment facing legislative paralysis in the face of ideological opposition coming from both sides of the aisle.

If Obama was the spark that created the populist political insurgencies behind both Sanders and Trump, then Biden is a continuation of that spark. 2020 may have proven to be the Democratic establishment’s last stand. Sun Tzu’s maxim, “If you know neither the enemy nor yourself, you will succumb in every battle,” is very much applicable in the current political environment. Dovere’s book underpins the reality that the Democratic Party neither understands itself, nor the political enemy it is facing. Unless things change, this does not bode well for Democrats in either the 2022 midterms or the 2024 presidential election.