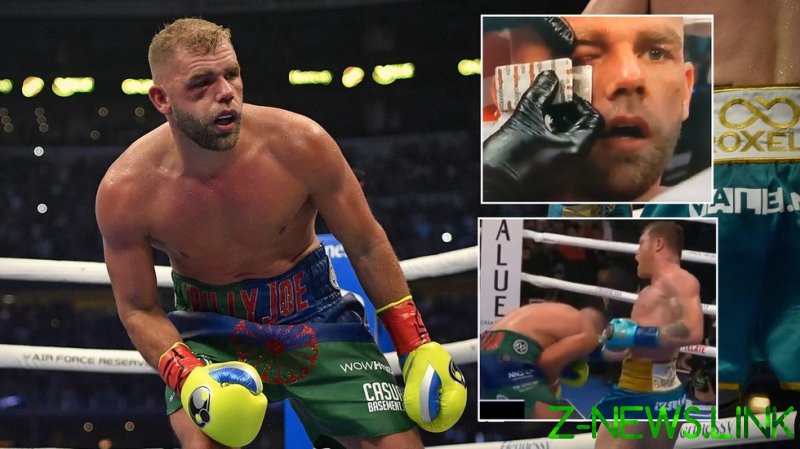 Saunders was forced to quit on his stool after the eighth round in front of 73,000 fans at the AT&T Stadium in Arlington, having been rocked by a savage uppercut from Alvarez which welded his right eye shut with the swelling.

The victory for the Mexican pound-for-pound king handed him Saunders’ WBO super middleweight title to go with the WBA and WBC crowns already in his possession, while the beaten Brit endured a first defeat in 31 contests as a professional.

Saunders was immediately transported to the John Peter Smith Hospital in Fort Worth after suffering a suspected broken orbital bone, and the latest reports indicate that he remained there overnight and will undergo surgery on Sunday for multiple fractures.

Respected boxing writers Mike Coppinger and Dan Rafael both tweeted that was the case, with Coppinger citing a hotel lobby conversation he had held with promoter Eddie Hearn. Hearn himself later tweeted he had visited Saunders and that he required surgery.

Saunders, 31, was making some inroads in the fight but was still behind on all three scorecards at the time of the stoppage.

After quitting, Saunders had his credentials questioned by some fans and fellow fighters on social media – not least after a build-up to the fight which had included the Brit taunting his Mexican rival and members of the foreign press.

Some also highlighted past statements from Saunders that he would need to be carried out of the ring before surrendering – although slightly more sensible heads have noted the severity of the damage dished out by Alvarez.

Saunders’ cornerman Mark Tibbs defended the decision to throw in the towel, saying of his fighter: “He’s a young man. He’s got a family. He’s got children. I’ve known him a very, very long time. He lives to fight another day.”

However, given the severity of the injury and the delicate area where it occurred, there will inevitably be fears for Saunders’ fighting future.

“He’s going to be out for a long, long time,” Hearn was quoted as saying after the fight.

Speaking about the shot which obliterated Saunders’ eye socket and ultimately destroyed his will to continue, Alvarez said in his post-fight interview that he knew the punch would be decisive.

“I knew this would be final outcome,” the Mexican said through a translator.

Alvarez earned a 56th win in 59 professional fights, and the 30-year-old’s sole career defeat remains his majority decision loss to Floyd Mayweather back in 2013.

After seeing off Saunders, the Mexican’s attentions turned to the only 168lbs title not in his possession: the IBF crown held by Caleb Plant of the US.