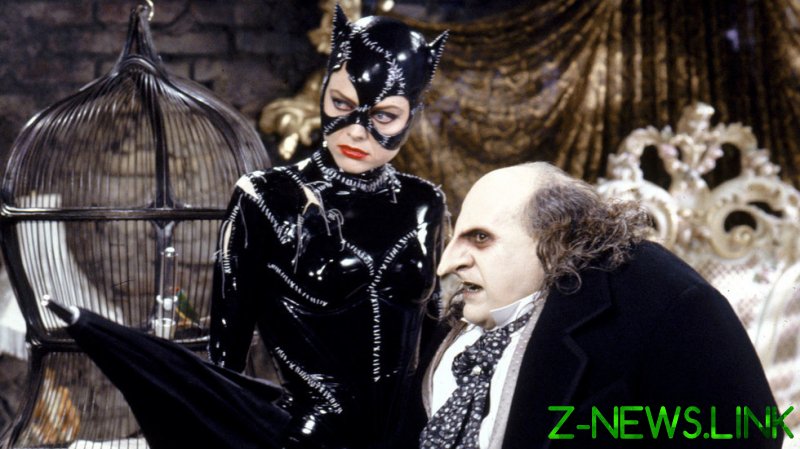 The story is part of DC Comics’ 100-page anthology dedicated to various members of the Batman rogues’ gallery. Oswald Cobblepot, which is the real name of the short-statured umbrella-loving gangster, is the protagonist of the ‘Bird Cat Love’ comics.

It was penned by writer, actor, and producer Danny DeVito, who played the Penguin in the 1992 movie ‘Batman Returns,’ opposite Michael Keaton as the dark knight and Michelle Pfeiffer as the seductive, whip-armed Catwoman, aka Selina Kyle.

In the film, DeVito’s villain had an unrequited crush on the antihero kitty, but Batman ultimately got the girl.

In the new series, DeVito has turned the tables on Batman, writing a story about a Penguin / Catwoman romance with a side quest of saving the world.

According to early reviews, the two team up to [SPOILER ALERT] steal Covid-19 vaccines that were being hoarded by greedy Big Pharma and use them to vaccinate everybody – with or without consent – before riding off into the sunset.

Speaking to the media, DeVito said he was hesitant about DC Comics’ proposal at first, but then realized it was a chance to revisit the relationship that failed in the film and include the global struggle with the pandemic for good measure. He told Forbes that Michelle Pfeiffer gave her blessing to put his “fantasy” on paper.

The anthology comes out as the publisher celebrates the 80th anniversary of some of the most recognizable Batman villains, including the Penguin.

DeVito worked on his part with artist Dan Mora, who is a regular at DC. Other stories in the book spotlight the Scarecrow, Poison Ivy, Ra’s and Talia al Ghul, the original Red Hood, the Mad Hatter, and Killer Moth.