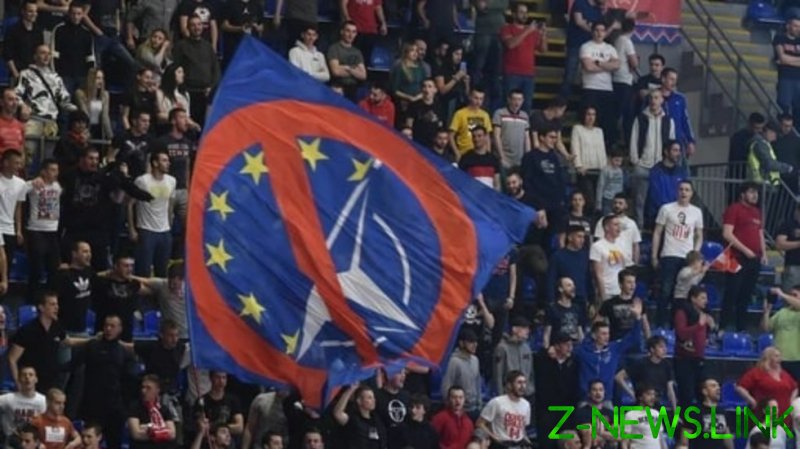 Red Star Belgrade fans demonstrated support for Russia by holding up an anti-Nato and EU banner during a Euroleague basketball match on Friday.

A pocket of the Serbian outfit’s supporters responded to an incident during a postponed match against Lithuanian team Zalgiris on April 3.

Before the 103-98 loss for visiting Red Star, their starting five players were booed for refusing to hold a Ukrainian flag banner that had a ‘Stop War’ message printed on it.

Last night, during their home game against Andalou Efes, Red Star fans reacted to the treatment by holding up their own banner with a crossed-out Nato symbol on an EU flag backdrop.

Throughout the 93-85 win for the hosts, they also reportedly chanted “Serbia-Russia”.

Red Star are yet to comment on the incident but said after the attention brought to the Zalgiris game that they wished to “prevent any speculation and politicization of the players’ gesture”.

“In our official communications with the Euroleague and the Zalgiris club management, we made it clear several days before [Sunday’s] match that we will not allow any politicization and that we will not carry a banner in colors of the flag of any country,” its statement said.

Given they also stressed that as a representative of Serbia they must “follow the official position” of their homeland, which refuses to impose sanctions on Russia, the club will perhaps refrain from condemning the action.

“Our request not to carry a banner that is not neutral was not accepted,” Red Star confirmed, with club also asking the Euroleague to “react urgently, open a disciplinary procedure and sanction this violation of the basic principles and rules of the Euroleague.”

Red Star also ironically asked whether, regarding the Ukraine banner events, it must “rightfully demand from all the players in the matches in Belgrade to carry a banner ‘Kosovo is Serbia'” in reference to the former Serbian province that achieved independence in 2008.

In May, Belgrade is set to host the Euroleague Final Four to this backdrop of controversy.