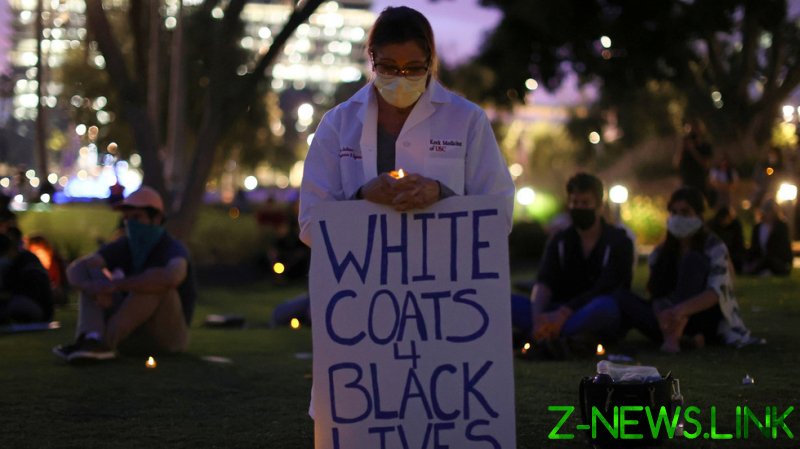 Last month they published an article in the Boston Review calling on the hospital to give “cash transfers and discounted or free care” to “black and latinx” patients, and to prioritize these patients for cardiology admissions, presumably over white people. Given that minorities have historically received poorer cardiological care than whites, the two doctors feel that the best way to redress the imbalance is to embrace the “antiracist agenda” of woke charlatans like Ibram Kendi, and turn the tables on whitey.

They don’t care about the law either. “Offering preferential care based on race or ethnicity may elicit legal challenges from our system of colorblind law,” they wrote, before encouraging “other institutions to proceed confidently on behalf of equity and racial justice” regardless.

Their lengthy article is crammed full of easily-disprovable social justice abracadabra, so much so that responding to each false claim would fill bookshelves. But their core argument – essentially that “racist death panels are a good thing when we do it” – is so insane that readers must be wondering who could possibly support such an idea.

Well, the Biden administration, for one. While President Joe Biden has obviously not demanded that whites be left to die in the waiting room, Wispelwey and Morse cite his recent executive orders as inspiration, particularly his edict on “advancing racial equity.” Note that “equity” does not mean “equality.” Treating everyone the same regardless of race is “equality.” Selectively intervening to help one race, usually at the expense of another, is “equity.” Put simply, someone has to pay for all those reparations.

Equity has become a buzzword of the Biden administration. Centers for Disease Control and Prevention (CDC) Director Rochelle Walensky invoked it on Thursday when she declared racism to be a “serious public health threat,” and committed herself to stamping out “racial and ethnic health inequities.”

What she’ll do remains unclear, and could span anything from handing out vitamin supplements in black neighborhoods to skipping black patients to the front of the queue, as our two racist doctors suggest.

It goes without saying that handing control of healthcare over to racist lunatics is not a good idea. It sticks up a middle finger to anyone who aspires to judge their fellow citizens “not by the color of their skin but by the content of their character.” Martin Luther King’s quote is cliché at this point, but it’s underpinned race relations in the US for decades, and is objectively fairer than anything the Critical Race Theorists have come up with since.

The burning question is why all of these institutions march in lockstep. Nobody’s forcing any of them to take these divisive positions, but they’re taking them regardless, and acting as one. At best, our elites are well-meaning people suffering from some sort of mass psychogenic illness. At worst, they’re all in agreement that the caucasian race is evil, and must be punished and humiliated.

Another explanation: it’s all about power. Neoreactionary writer Curtis Yarvin dubs the woke corporate-academic-media complex “the Cathedral.” It’s the same hivemind that the hippies called “the man,” the punks called “the system,” and the Rastafarians call “Babylon.” The ‘Cathedral’ as we know it is woke, because woke ideas validate and support the use of power. When its institutions talk of “systemic racism” and “inequity,” they’re naming an invisible and ill-defined enemy that can be used to gin up support for any use of that power.

For example, Joe Biden’s executive order on “advancing racial equity” doesn’t just ask Americans to be nicer to each other. It asks the federal government to create multiple task forces and policy groups, to compile reports, and eventually to spend taxpayer money on the issue it decided was a problem in the first place.

It’s a makework scheme, and it cancels, censors, and punishes dissent so vigorously because if it were ever exposed as the fraud it is, a lot of people would be out of a job.

Without the never ending war on “systemic racism,” the high priests of the Cathedral would be minus a vocation. Ibram Kendi and Robin DiAngelo would have to perform meaningful work for a living. Journalists might have to actually cover the misdeeds of the powerful. Corporations like United Airlines might have to focus on customer service, and the sick and unhealthy citizens of the US might start asking why on earth their healthcare costs so much, instead of squabbling over their place in the racially-segregated triage.

Unfortunately, DiAngelo isn’t scrubbing toilets. Instead, Critical Race Theory has permeated society to such an extent that two self-described “experienced physicians” are openly discussing pushing white patients to the back of the line. If that isn’t enough to justify pulling the plug on this sick ideology, then they’ve already won.