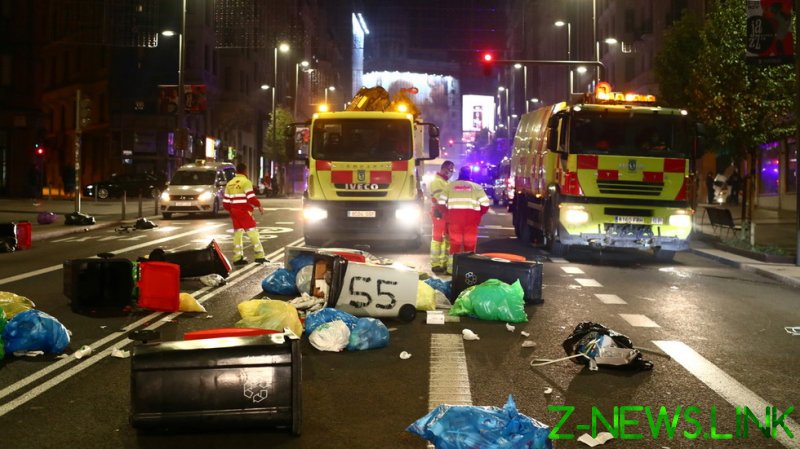 When police moved in to clear the unruly gathering, they were pelted with stones and flares, and reportedly fired blank bullets forcing the protesters to disperse into nearby streets.

Meanwhile in Barcelona, police officers were once pelted with stones and other projectiles, as they tried to disperse a smaller-scale anti-lockdown protests for the second consecutive night.

The regional government of Catalonia approved a new package of measures this week, including the perimeter confinement of each municipality, limiting people to their own district on weekends.

Heated protests were also reported in Granada, Malaga and Bilbao.

Spain’s prime minister Pedro Sanchez urged Spaniards, in a Saturday night tweet, to show patience and demonstrate “responsibility, unity and sacrifice” to defeat the global pandemic, while condemning the “violent and irrational behavior” by a “small minority” of the population.

Spain’s parliament approved a six-month extension to the national state of emergency last week , granting regional authorities more power to tackle the country’s second wave of Covid-19. This is Spain’s third extension to the state of emergency during the pandemic and will be in force until May 9, but with the option for it to be lifted on March 9.

Under this new extension, regional governments have the power to control freedom of movement and curfew times without having to go through complicated fortnightly procedures in parliament. Since then, many regions have toughened their coronavirus measures, with nighttime curfews, lockdowns and travel restrictions.