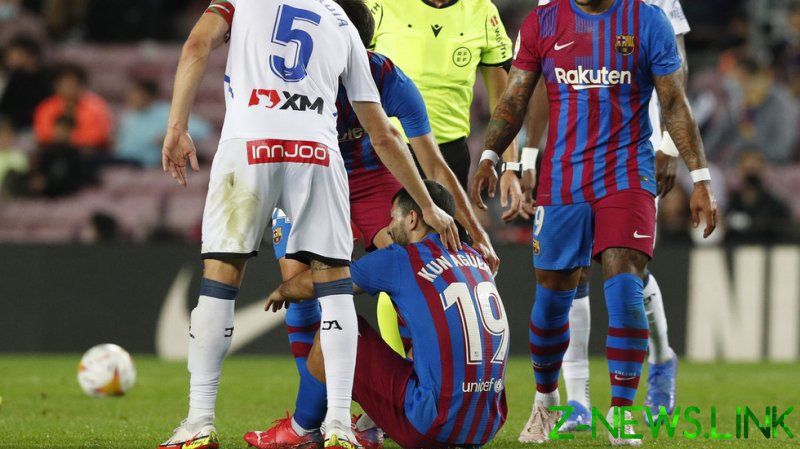 The scare occurred approaching half time in a 1-1 draw with Alaves at Camp Nou.

Signaling that he wanted to be taken off by interim manager Sergio Barjuan, the Argentine then laid on the turf and was attended to by medical staff who raced onto the pitch.

Well enough to at least rise to his feet and exit play to applause, Aguero was later filmed leaving the scene in an ambulance.

Hospital cardiac exams have reportedly discovered that the 33-year-old suffered chest discomfort because of an undiagnosed cardiac arrhythmia, or heart rate rhythm disorder.

Because of this, he is expected to remain in medical care on Sunday and Monday while further examinations are carried out, and will therefore miss Tuesday’s vital Champions League clash with Dynamo Kiev.

Meanwhile, local newspaper SPORT has claimed that family members have told them Aguero is trying to keep calm but is “a bit worried”.

“This is all new to him,” they added, with the developments hitting him “like a jug of cold water”.

With Barca languishing near mid-table and nine points behind La Liga leaders Real Sociedad before kick-off, Aguero reportedly assured those closest to him that his team had to win against Alaves and that he felt “very good” and “very involved” in the action.

He saw himself playing “many more minutes” with a “greater intensity”, but at the end of the opening 45, “he felt his pressure rise and his heart rate increase”.

Separately, Barjuan has said: “He told me he was a little dizzy”, but added that he didn’t “know any more” about Aguero’s case.

More concrete details have emerged since, but the Copa America winner has no set return date with Barca’s next game after Kiev a November 6 meeting with Celta Vigo before the two-week international break.

After that, the Blaugrana’s following outing is in the derby against Espanyol on November 20.