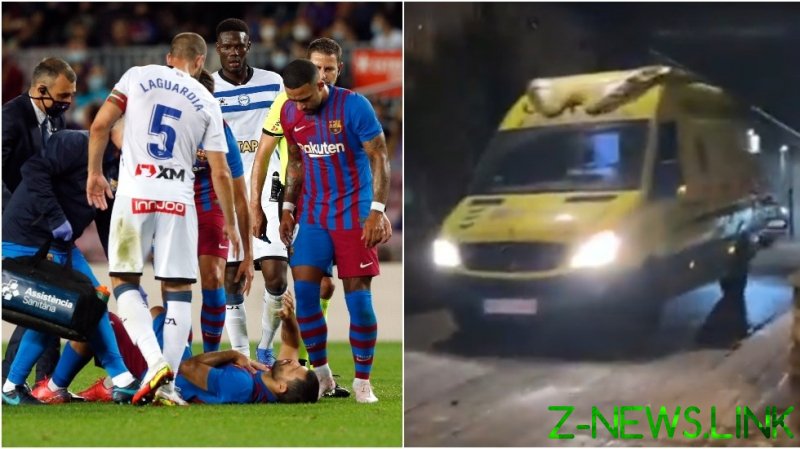 The Argentine’s discomfort occurred before half-time in a 1-1 draw with Alaves which brought his first start at the Camp Nou since joining from Manchester City as a free agent this summer.

Play was halted after the 33-year-old signaled to the bench that he wanted to be taken off.

The five-time Premier League winner then lay on the turf clutching his chest.

Medical staff raced on the pitch to attend to Aguero, who was eventually able to get up and slowly walk off the pitch unaided and to a round of applause as he was replaced by fellow South American Philippe Coutinho.

Commenting afterwards, interim Barcelona coach Sergio Barjuan said: “He told me he was a little dizzy. I have found out now that they have taken him to the hospital to see what he really has. I do not know anymore.”

On their social media accounts, Barca confirmed that Aguero had been admitted to hospital “for cardiac analysis”.

This was partly carried out upon arrival and will be continued this morning, with Argentine journalist Veronica Brunati reporting that Aguero suffered a tachycardia from his heart rate beating too fast but was feeling “good” and will “continue to be evaluated”.

“Excuse me, Gaston,” a follower replied to his post on the matter. “But a tachycardia that takes your oxygen away is a panic attack. I don’t know what is happening to Kun but it can happen to anyone and anywhere. It goes beyond the physical [condition].”

Another claimed that the panic attack does not take away oxygen but instead requires more than usual, though.

Suffering a calf knock himself, Aguero only pulled on the iconic Blaugrana shirt in October despite joining the club in May, and netted his first goal for his new employers in the 2-1 loss to Real Madrid in El Clasico last Sunday.

His medical scare is the most recent of a string of cardiac issues in football after now-recovered Denmark star Christian Eriksen suffered a cardiac arrest at Euro 2020.