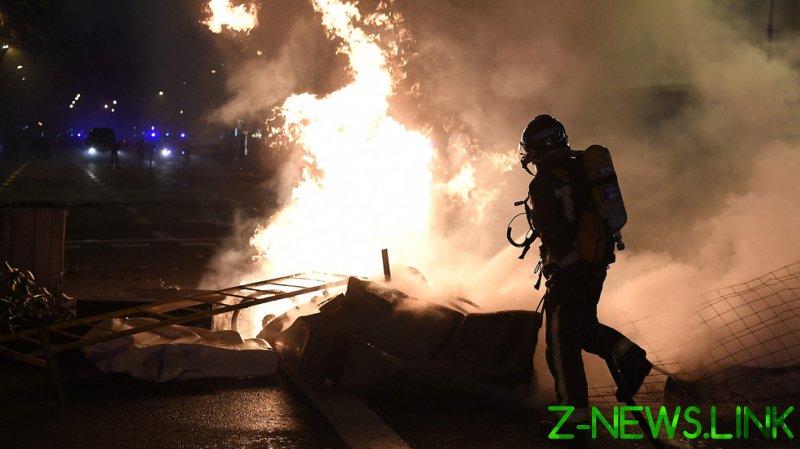 As night fell over Barcelona on Wednesday, crowds of protesters rolled makeshift barricades down the central Via Laietana, before setting them on fire. The sound of breaking glass could be heard in videos filmed by onlookers, along with the crack of police weapons in nearby streets.

Crowds of protesters turned out in the Catalonian capital, as riot police kept watch over the gatherings.

Fires were also reported in Lleida, the city Hasel was arrested in on Tuesday.

The protests came a day after similar demonstrations over the arrest devolved into riots. Protesters chucked projectiles at police officers on Tuesday night, and the officers responded with rubber bullets. One protester lost an eye when she was struck with a rubber bullet, activist group IRIDIA claimed.

Hasel, whose real name is Pablo Rivadulla Duro, was arrested earlier on Tuesday after barricading himself inside the University of Lleida in western Catalonia. Less than two weeks earlier, he was sentenced to nine months in prison for calling disgraced former monarch Juan Carlos I a “thief” and a “mafia boss,” and for a social media post praising GRAPO, a Spanish Maoist terrorist group.

The rapper’s sentencing and arrest weren’t his first run-in with the law. In 2014, Hasel was found guilty of voicing his support for Basque separatist terrorist group ETA, but his sentence was suspended in 2019.

Hundreds of artists and activists, including director Pedro Almodóvar and actor Javier Bardem, have demanded the government release Hasel. The rapper’s lawyer told the Catalan News Agency on Wednesday that his jailed client is “satisfied” with the “wave of outrage” his imprisonment set off.