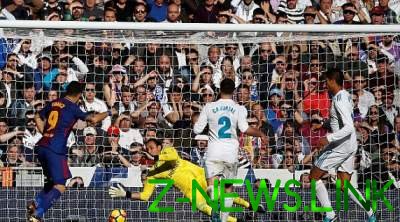 The main match of the first round of the championship of Spain ended with an unconditional victory of “Barcelona”.

Real powerful start tried to catch Barcelona by surprise, and it almost worked. Already on the third minute Ronaldo after a corner sent the ball into the net, but the judges rightly cancelled the goal because the Portuguese at the time of impact was in an obvious offside.

The end of the half the teams exchanged with killer moments – Ronaldo was parried by Ter Stegen, Benzema hit the bar and the two lunge Paulinho neutralized Navas.

After a break “Barcelona” has managed to remove all questions on the winner of El Clasico. In the 54th minute Luis Suarez has completed the exemplary counter attack of the Catalans and after 10 minutes, Carvajal hand knocked the ball away from his goal, a red card and a penalty scored from Messi. 0:2.

“Real” efforts Bale tried to resume the affair, but Ter Stegen today left my gates unopened. On the last
minute, Barcelona managed to bring the score to devastating – who replaced Vidal after the passage Messi scored against real Madrid third goal.

“Barcelona” in the 70-th time defeated real Madrid in the Spanish League and away from “Creamy” on 14 points. Looks like a championship intrigue in the Example is now completely evaporated.