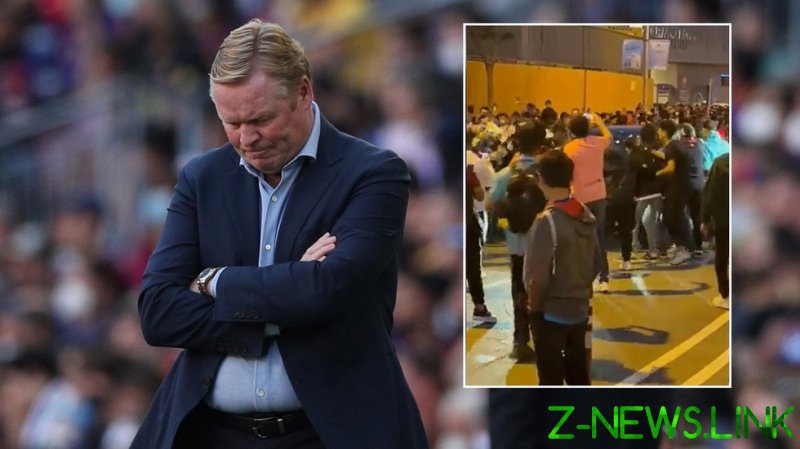 Bullied by the likes of Brazilian youngsters Vinicius Jr and Rodrygo, Barca were outclassed in the latest installment of the world’s biggest derby and a 2-1 scoreline was flattering.

But at least there were better attendance figures than usual, with the Catalans unable to fill half of their stadium in their last two outings yet welcoming 86,400 punters on this occasion.

After the full-time whistle, though, some of that number had enough and wanted to have their voices heard by the club legend long-tipped to be fired then replaced, with Xavi Hernandez and Roberto Martinez candidates for his job.

As captured by a popular fan account, an angry mob reportedly waited for Koeman to pull out of the car park.

Stopping the Audi in its tracks and banging on the vehicle while shouting things such as “get out”, Barca supporters surrounded the vehicle with 58-year-old inside, although he eventually managed to pull away.

“This situation must be nipped in the bud,” read the caption to the video regarding Barca’s poor form.

“It is not sustainable.”

“And for the record, I find it a shame to see images like this, they are not the solution, but I can understand that people are very tired that nothing changes,” clarified the page with almost a quarter of a million followers.

“From Wembley hero to villain…,” it trailed off, in reference to Koeman’s match-winning free-kick in the 1992 UCL final at Wembley Stadium against Sampdoria that brought the Blaugrana their first continental crown.