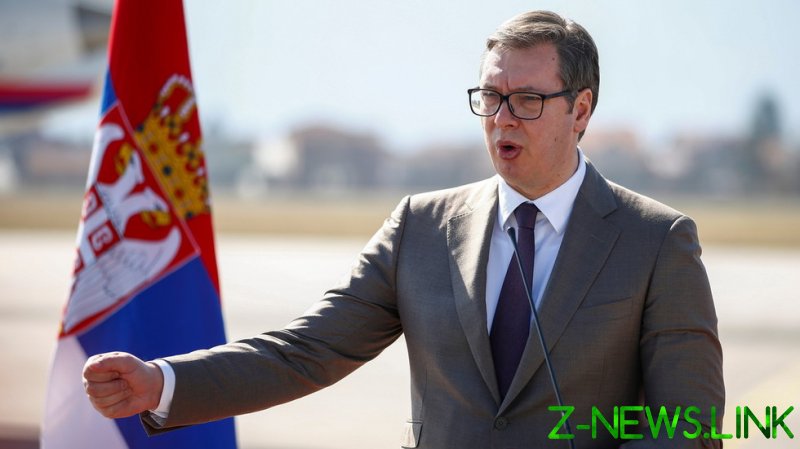 Twitter began appending the “state-affiliated” media label to outlets back in August 2020, in preparation for the US presidential election. This week the labeling was extended to Serbia, where the localization of “state-affiliated” turned into a rather more sinister-sounding “government collaborator.”

“Twitter is a propaganda machine of war,” thundered a headline in the tabloid Informer, above an interview with a pundit who claimed the US-based social networks were “doing the same thing NATO bombers did in 1999,” and illustrated with a photo of Hitler peeking out of Twitter’s blue bird logo.

“Who else should they cooperate with, oligarchs, thieves and criminals?” Vucic – whom the AP described as an “autocratic leader” – said in response to the labeling. “It’s the most normal thing for the media to cooperate with the government.”

“We don’t even fund most of these outlets, as a state. But they fund Voice of America and the BBC, and they are not labeled state media. Which leads me to wonder who is doing the censorship here,” he added.

This was a reference to Twitter’s infamous decision to “permanently suspend” Trump’s account in January, while he was still the sitting US president, on grounds that he ostensibly incited the riot at the Capitol.

Twitter’s initial wave of labeling targeted Russian and Chinese outlets, while declining to do the same for US, British, or German outlets funded entirely by their countries’ governments. The Serbian Radio-Television (RTS) pointed out the hypocrisy of this in their statement protesting the labeling, and noting they are not funded by the state budget but from license fees, just like the BBC.

Calling the labeling a form of “impermissible pressure” on the media, RTS said it was “scandalous” that Twitter applied the label without notifying them, offering any “serious and argument-based explanation” for the move, or explaining what could or should be done to get rid of the label.

The move is “insulting to Twitter users, who are considered incapable of drawing their own conclusions about the content they read and follow,” the outlet added.

Moreover, declaring journalists “government collaborators” can turn them into targets and expose them to security risks, RTS argued, pointing out that the last time this happened – in April 1999 – NATO bombed their building in Belgrade and killed 16 of their employees.

Twitter defines state-affiliated media as those where the state “exercises control over editorial content through financial resources, direct or indirect political pressures, and/or control over production and distribution.” The platform “will not recommend or amplify” accounts thus labeled.

Much of Serbia’s media space is controlled by Western corporations, such as Ringier Axel Springer Media AG and KKR Global – which owns the CNN affiliate N1 as well as the SBB cable distribution network.