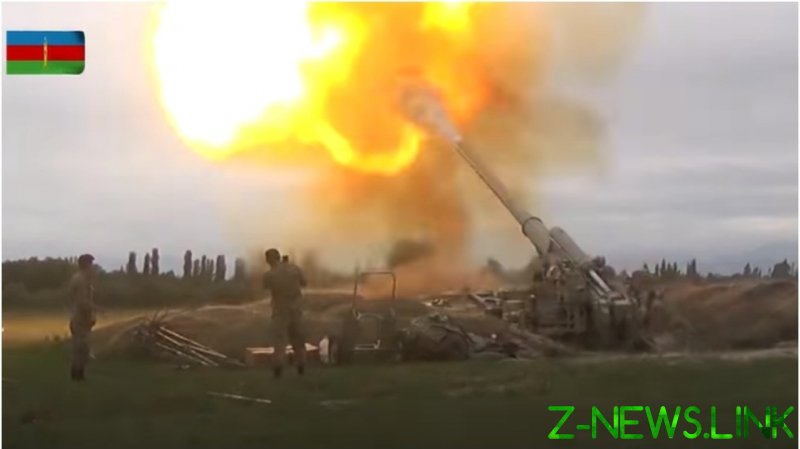 Around 2,300 “enemy personnel” have been killed or wounded since fighting broke out on Sunday, Azerbaijan’s Defense Ministry reported. Officials added that an Armenian S-300 air defense missile system was destroyed at the frontline in Karabakh, along with around 130 tanks and more than 200 artillery pieces.

Officials in Nagorno-Karabakh, a self-declared republic within the borders of Azerbaijan that is closely allied with Armenia, meanwhile, reported that 80 of its soldiers were killed.

Heavy fighting broke out on September 27 after both sides blamed each other for violating the 1994 ceasefire agreement. The clashes continued throughout Wednesday morning as Azerbaijan accused Armenia of shelling the town of Tartar in the west of the country. At the same time, Stepanyan said that artillery fire continued along the entire frontline in Karabakh. She added that two Azeri drones were shot down over Karabakh’s capital Stepanakert.

Azerbaijan is openly backed by its longtime ally Turkey, whose leader Recep Tayyip Erdogan demanded that Armenia ends its “occupation” of Karabakh. On Tuesday, the Armenian military claimed that its Su-25 fighter jet was shot down by a Turkish F-16. Both Ankara and Baku denied this.

The century-old conflict in Karabakh was reignited when the large Armenian-populated enclave broke away from Azerbaijan during the breakup of the Soviet Union. A truce was signed after several years of bloody warfare, under which Nagorno-Karabakh became de facto independent from Baku.