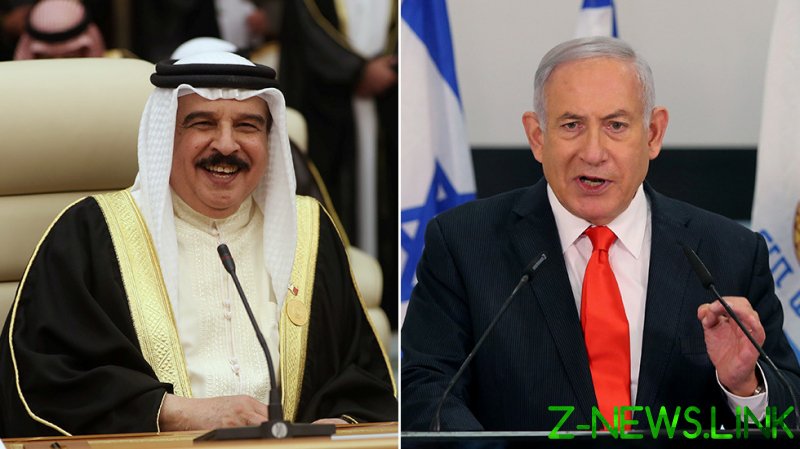 He also posted the text of a joint statement with King Hamad bin Isa bin Salman al-Khalifa of Bahrain and Israeli Prime Minister Benjamin Netanyahu, confirming that a representative of the Gulf monarchy will attend the September 15 ceremony at the White House and sign a Declaration of Peace with Israel alongside the UAE.

The UAE congratulated Bahrain and Israel on the decision to establish diplomatic relations, the spokeswoman for the foreign ministry in Abu Dhabi told reporters.

Israeli Ambassador to the US Ron Dermer praised the news on Friday and thanked the Emirates and Bahrain for “this historic breakthrough.” He also thanked Trump for “confronting Iran and helping transform our region for the better,” teasing that there is “more to come!”

The tiny Gulf monarchy, ruled by a Sunni dynasty closely allied with Saudi Arabia, is the second Arab country to recognize Israel in the past month, openly crediting Trump’s mediation efforts for the move. The Bahrain-UAE peace treaty with Israel is the first such document since Jordan made peace with the Jewish state in 1994.

After the UAE announcement on August 13, Trump teased that other countries were going to follow suit “soon.” Bahrain was rumored to be on that list, not least because Manama hosted the 2019 Peace to Prosperity workshop, intended to pitch the economic portion of Trump’s “Deal of the Century” proposal to end the Israeli-Palestinian conflict. Though the Palestinians have roundly rejected both the economic and the political proposals coming from the White House, the Emirates and Bahrain have decided to recognize Israel.

One Norwegian parliamentarian has already nominated Trump for the Nobel Peace Prize, citing the August deal with the UAE. On Friday, another parliamentarian nominated the US president again, this time for last week’s controversial agreement between Serbia and its breakaway province of Kosovo.

Only a handful of Arab or Muslim countries have recognized Israel since it declared independence in May 1948, and many have fought repeated wars with the Jewish state. Bahrain’s recognition will bring the number of UN members that do not recognize Israel down to 29.