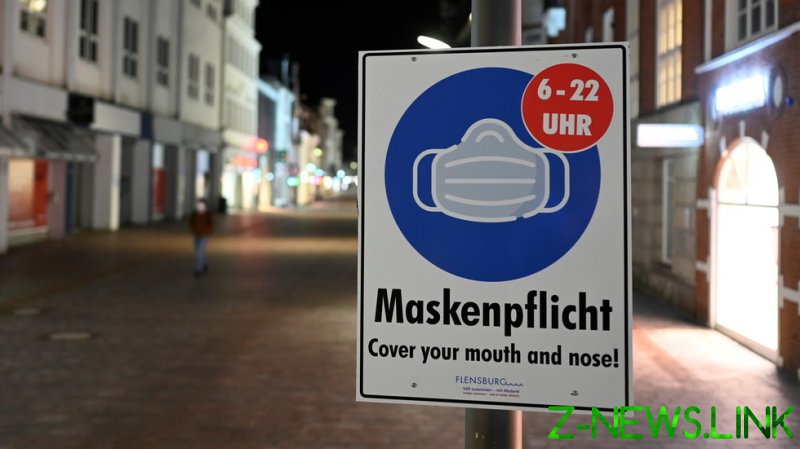 Berlin is currently working on amendments to the national Infection Protection Act that would significantly tighten the lockdown restrictions and greatly reduce the federal states’ ability to defy the government’s orders, German media that obtained the draft document report.

The document that is expected to be discussed and potentially approved by Chancellor Angela Merkel’s cabinet on Tuesday includes binding requirements for all federal states where an average seven-day Covid-19 infection rate will rise over 100 per 100,000 people. Such states will no longer be able to find any excuses to avoid imposing the so-called “emergency brake,” the supposed text of the bill, published by Die Welt on Saturday, reads.

All states over this threshold infection rate will be bound to introduce a standard set of measures developed by the federal government, should the legislation come into force. Such measures involve a night-time curfew between 21:00 and 05:00, with exceptions for medical emergencies, professional activities and for looking after people or animals.

Private and public gatherings would once again be limited to the members of one household and one person outside of it, with children under 14 excluded from this rule.

All non-essential stores and services, including cafes, clubs, museums and sports facilities, as well as shops other than grocery stores, pharmacies and petrol stations, would be closed. Employers would also have to let their employees work from home if there are no “compelling reasons” for them to stay in the workplace. Universities would switch to distance education, with in-person classes only being allowed if every person attending them presents a negative Covid-19 test result.

Such restrictions could only be lifted if the average seven-day Covid-19 infection numbers remain below the threshold level for three days in a row. The bill would grant the federal government an ability to issue special statutory ordinances – a right previously reserved for the federal states only – to regulate the restrictions and “guarantee nationwide uniform control” over the Covid-19 measures.

If adopted, the new bill will likely affect almost all German federal states. According to the Robert Koch Institute – Germany’s federal agency responsible for disease control and prevention – only three out of 16 federal states have a seven-day incidence rate below 100 per 100,000 people. In the western state of Saarland, this rate is 98.8, which means it can potentially cross the threshold at any moment.

German authorities seemingly aim to implement the new rules as soon as possible. According to some media reports, the bill was agreed-on by the federal cabinet and the states’ governments at short notice and without any deliberations being made public. A video conference between Merkel and the federal states’ heads, originally scheduled for Monday, was cancelled as well.

The German Bundestag President Wolfgang Schauble also made it clear that the parliament may decide on the bill as part of an urgent procedure and potentially approve it as early as next week. The legislation will then have to pass through the Bundesrat – another house of the German parliament representing the federal states – and can come into force as early as April 19, some media report.

Germany has been in some form of lockdown since November but is struggling to curb a recent spike in cases linked to the so-called British variant. The Robert Koch Institute recently reported a sharp rise in the number of new cases.

Earlier this week, Merkel also spoke in favor of a short and sharp nationwide lockdown as the head of the Robert Koch Institute said that between two and four weeks of severe restrictions could be necessary to end the third Covid-19 wave.