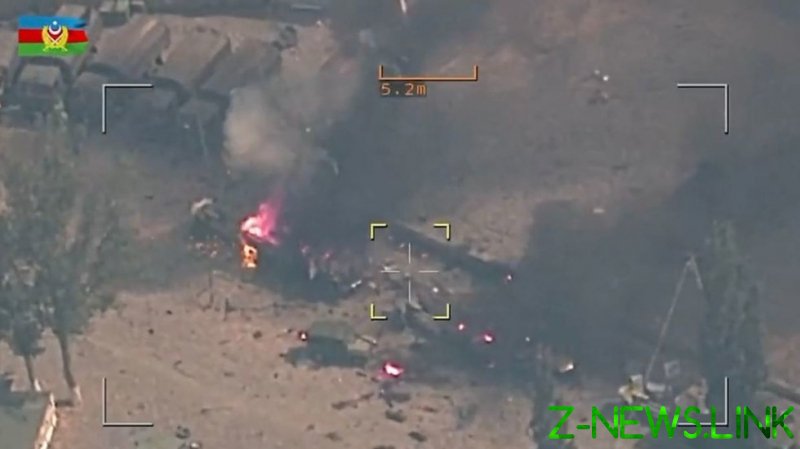 Armed forces of Azerbaijan have conducted a military operation against the Nagorno-Karabakh militias that sought to “establish new combat positions” in the region, the nation’s defense ministry said in a statement on Wednesday. The Azerbaijani Army seized control over some “important commanding heights” during what it called ‘Operation Revenge,’ it added.

The operation was launched after the local militias “grossly violated” the 2020 ceasefire agreement between Yerevan and Baku, mediated by Moscow in 2020, the defense ministry added. Baku had earlier accused the Nagorno-Karabakh militias of attacking Azerbaijani positions in the region and confirmed the death of at least one soldier.

The ministry also published a video that appears to show an airstrike on a local militia’s base housing some artillery units. Footage showed several towed artillery pieces and trucks being destroyed.

Tensions have been running high in the region of Nagorno-Karabakh for days now. The region is officially part of Azerbaijan. Both Yerevan and Baku have recently accused each other of military provocations in the region, and have reported casualties. Russia, which has a peacekeeping force in the area, reported “ceasefire violations” and said it took measures to “resolve” the issues arising.

Each side has been accusing the other of attacks, including “intensive” shelling, since Monday, when the first reports about a flare-up appeared in local media. Armenian media reported the Azerbaijani troops attacking the local ethnic Armenian militias in several locations throughout Nagorno-Karabakh over the past days, and have accused Baku of planning an offensive in the region.

The Armenian Ministry of Defense has so far not officially commented on the developments. Armenia’s Security Council Secretary, Armen Grigoryan, told local media on Wednesday that Baku wanted Armenia to stop using the so-called Lachin Corridor – a mountainous pathway that links it to the disputed region of Nagorno-Karabakh – and to choose another route. Grigoryan has denounced such demands as violating the 2020 agreement.