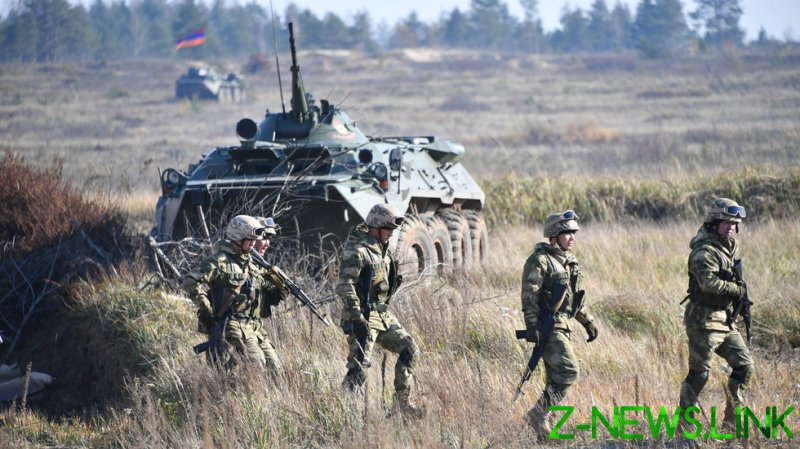 There have been skirmishes “of different intensity” overnight on the Nagorno-Karabakh border, a spokesperson for the Armenian Defense Ministry reported earlier on Monday. “The adversary resumed offensive using artillery and armor, including the heavy flamethrower system TOS,” the official revealed.

The Armenian military are deterring the attack, “inflicting significant losses on the enemy in manpower and equipment.”

Baku, meanwhile, blamed its arch-nemesis for targeting civilian-populated areas. On Monday morning, Armenian forces have been shelling Terter, a border town of roughly 19,000 people, Azerbaijan’s Defense Ministry told the media. “Proper measures” will be taken if the bombardment doesn’t stop, the ministry warned.

Previously, Baku suggested at least 550 Armenian soldiers were killed or injured in the Azeri “counteroffensive,” along with dozens of tanks, howitzers, and air defense systems lost in action. Yerevan promptly rebuked the claim as “unfounded.” Nagorno-Karabakh itself reported a loss of 31 Armenian soldiers in the fighting.

The lingering hostilities broke out previously on Sunday morning. Yerevan accused Baku of using combat aircraft and heavy artillery to bomb targets within Nagorno-Karabakh, a disputed region administered and populated by ethnic Armenians but claimed by Azerbaijan as part of its territory.

Baku, in turn, said it had counter-attacked in response to Armenian “provocations.” Both sides – which have fought on numerous occasions since the Soviet Union’s demise – sent reinforcements to the frontline and blamed one another for targeting civilians.

Nagorno-Karabakh and its longtime ally and backer Armenia declared martial law and issued a total mobilization of conscription-age males on Sunday, with Azerbaijan following suit later in the day. Azerbaijan’s authorities have also cut off internet services, citing wartime requirements; social media and messengers including Facebook, Twitter, Telegram, and WhatsApp are also said to be out of service in the South Caucasus nation.

The fighting triggered a flurry of diplomacy, with the US, France and the EU calling for a cessation of hostilities immediately. Russia, which traditionally has warm relations with both Armenia and Azerbaijan, offered a mediation role, also discussing the crisis with Turkey – a country that promptly offered its “full support” to Baku.