Home / Society / Autumn’s call: who is entitled to deferment

Autumn’s call: who is entitled to deferment 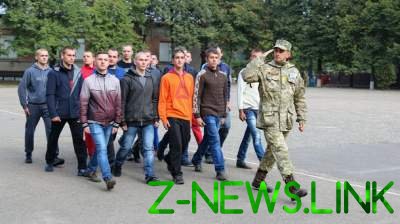 All the details of the autumn conscription.

Thursday, October 5, in Ukraine started the autumn conscription for military service, which will last until November 28. It is planned to recruit 10 460 recruits.

On who to expect on the agenda.

So, in the Armed forces planned to call 6 360 people in the National guard of Ukraine – 3 500, in the Public special service of transport 600 people. At the same time to participate in the ATO called up for military service Ukrainians will not be involved.

The decision on what kind of troops or military formations to serve as the recruit accepts the draft Board on the basis of his education, technical training and qualifications, suitability for service as health, physical development and moral and business qualities.

The autumn conscription for military service shall be fit for health men aged 20 to 27 years. At the time of service they are entitled to cash assistance in the recruitment and dismissal, at the time of service and a 10-day vacation. Also for the “conscripts” preserved place of work, position and average salary (subject to formal employment). Service time is counted in the insurance and seniority. To serve as conscripts to 18 months, and those who have a specialist degree or degree – up to 12.

As you know, under the law of Ukraine “On military duty and military service”, the right to exemption from conscription are men over the age of 27 years, those who were deemed unfit for service for health reasons; those whose father, mother, brother or sister died or became disabled during the military service.

On postponement of military service can count those who has disabled parents or relatives; who have a single mother/father, have a two and more children; who has a child up to three years or raising a child alone over three years (without a mother); who have two or more children or disabled child, a pregnant wife or wife is disabled, or whose brother was called to serve at the same time.

Also eligible for deferrals are orphans, temporarily unfit because of health status, students of day form under the age of 21 suspected of committing criminal offences or the defendants.

After receiving the agenda Ukrainians have to arrive at a certain collection point and within the time specified in the subpoena. If the reservist was not on the agenda in voenkomat, are not reported to the police station about the change of residence, he faces a fine in the amount of UAH 85-119.

For repeated violation – from UAH 170 to 255 hryvnias. And evasion can lead to criminal liability in the form of restriction of liberty for a term up to three years (article 335 criminal code).