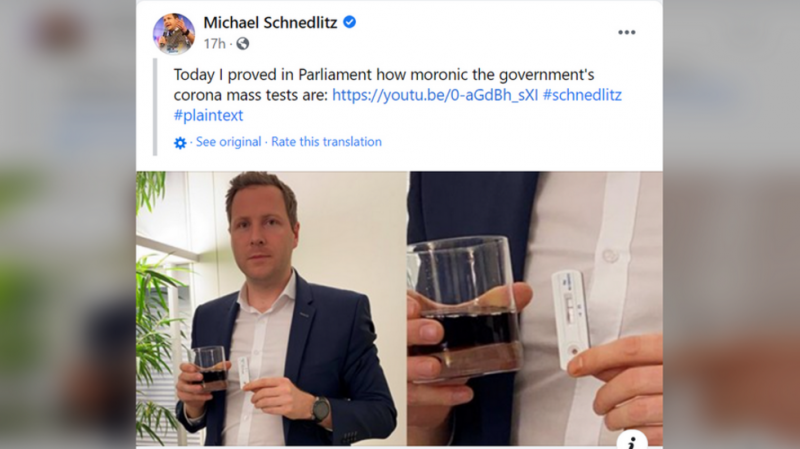 Michael Schnedlitz, a member of Austria’s National Council and the general secretary of the right-wing Freedom Party, railed against the government’s screening program and other coronavirus measures while addressing his colleagues in parliament on Thursday. During his speech, Schnedlitz administered a rapid Covid-19 test on a glass of cola, showing his colleagues after a few minutes that the sugary carbonated beverage had tested positive for the virus.

He described the tests as “worthless” and said publicly funded Covid-19 testing was a “massive redistribution of tax money in the direction of the pharmaceutical industry.” He went on to accuse the government of “dictatorship light,” claiming “Austrians have been deprived of their basic rights, such as their civil liberties and the right to freedom of expression,” during the health crisis. The lawmaker said Covid-19 restrictions have led to bankruptcies, mass unemployment, and social and economic crises, and have “robbed” children of their education.

Schnedlitz’s comments received widespread praise on social media, but some took issue with his testing technique. According to German’s Die Welt newspaper, the Austrian lawmaker administered the test incorrectly, skipping an important step before checking the sample for the virus.