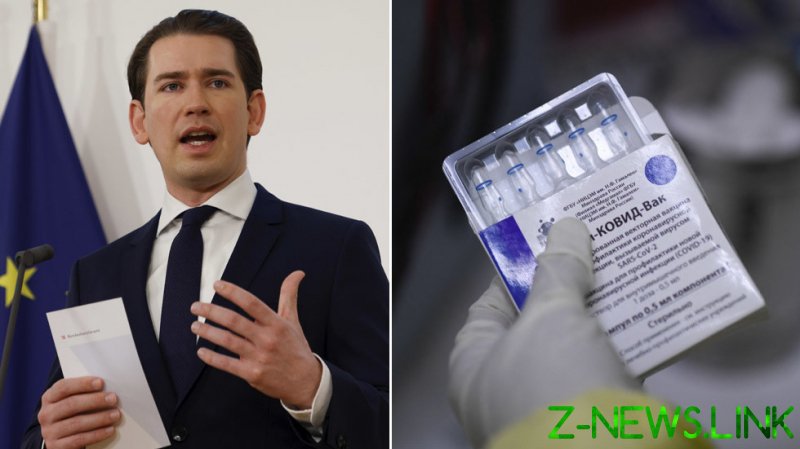 The news came from the chancellor himself, who revealed that Vienna and Moscow are engaged in talks, and said a deal should be agreed soon.

On Tuesday, Kurz explained that there should be “no geopolitical blinkers” when it comes to Covid-19, noting that the “only thing that should count” is whether the vaccine is effective and safe and “not where it comes from.”

“We have been in a good exchange with the Russian side since February, for which I am very grateful,” he said. “If Austria gets one million additional doses of vaccine, an earlier return to normality will be possible, and we can save many lives, as well as jobs.”

On February 26, Kurz phoned Russian President Vladimir Putin to discuss the possible export of Sputnik V to Austria. A week later, on March 5, the chancellor spoke to Kirill Dmitriev, the head of the Russian Direct Investment Fund (RDIF).

The planned 1 million doses will come in three separate stages, according to Austrian newspaper Kurier. The first batch of 300,000 is to be expected in April, with 500,000 more in May and 200,000 in June.

Kurz has repeatedly complained about the European Union’s vaccine distribution program, attacking the bloc for unevenly sharing the doses and depriving some countries in favor of others. After his calls for the European Medicines Agency (EMA) to speed up verification of Sputnik V, the conservative 34-year-old leader has opted to take matters into his own hands.

Despite it not yet being approved across the bloc, two EU countries, Hungary and Slovakia, have already unilaterally imported and started using the vaccine. Last week, reports from Germany alleged that Berlin also wants to import the Russian jab, and has asked the European Commission to begin negotiating with Moscow despite it not yet receiving approval and registration from the EU’s regulatory body.