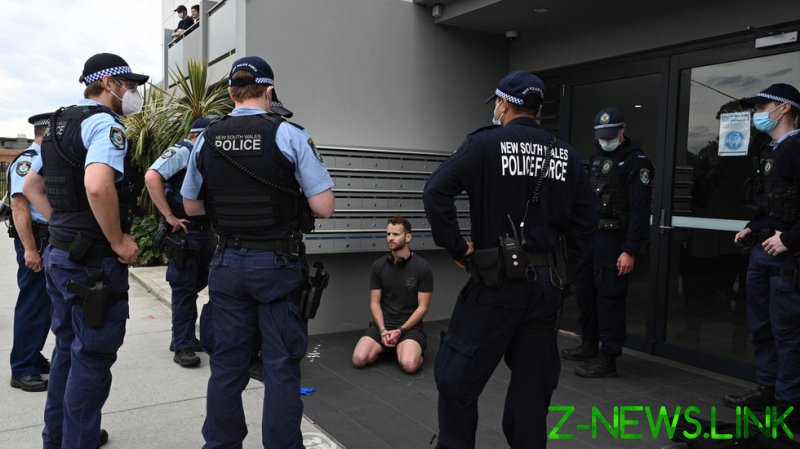 The protesters, who reportedly numbered in the hundreds, showed up in the Melbourne suburb of Richmond on Saturday morning to denounce government lockdown policies. Police previously attempted to shut down all transport into Melbourne’s Central Business District using a series of checkpoints, but that merely prompted organizers to shift locations.

Brief clashes with officers were captured on film, with protesters seen hurling bottles as police responded with pepper spray. At one chaotic moment, demonstrators crashed through a police line, setting off a melee as the crowd proceeded down the road.

A massive police response was seen in aerial photos taken by local media, showing riot lines closing in on a crowd of demonstrators.

The law enforcement presence involved more than 2,000 officers, according to local reports.

The state of Victoria recently eased Melbourne’s restrictions, allowing residents to “socialize or exercise” with one person from another household for a whopping four hours. It also permitted up to five people from two different households to gather at one time – if all of them are fully-vaccinated. The marginal easing of the rules apparently did little to quell angry locals fed up with lockdowns, however, as Saturday’s protest went off regardless.

Victoria’s Health Minister Martin Foley has suggested the state could remain under lockdown until 70-80% of residents are vaccinated. Until then, only the fully immunized will be permitted to enjoy certain freedoms, such as private gatherings with people from several households. To date, just shy of 42% of the state has been fully vaccinated, according to data gathered by the Guardian, suggesting a long road ahead for those tired of endless lockdowns.

Australia’s second-largest city, Melbourne is currently under its sixth lockdown since the Covid-19 pandemic kicked off in late 2019, with residents required to remain at home barring a few exceptions for “essential” work and travel. The shutdowns have prompted a spate of protests across Australia in recent weeks, including in other major cities like Sydney.

Victoria state, of which Melbourne is the capital, has seen a spike in coronavirus infections since August, with health officials pinning new outbreaks on the more contagious Delta variant. There are currently just shy of 5,000 active Covid cases in Victoria, with 535 new infections reported over the last 24 hours, according to Victoria health authorities.