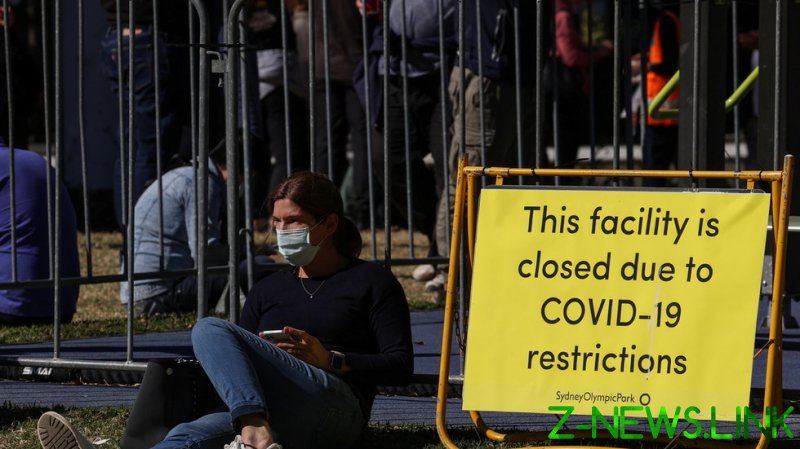 After calling for a “mental health commander” to join Victoria Premier Daniel Andrews, himself, and other high-ranking health officials for the state’s Covid-19 press conferences, Brett Sutton made a hasty exit from the podium when asked how the state planned to address a sharp increase in suicides among young people.

Every suicide is a terrible tragedy, but let’s not be speaking as if we can attribute with absolute certainty what motivated each of those tragic acts,” Andrews said, opining that the rise in deaths may have been caused by many factors other than the Covid-19 lockdowns that have deprived Australians of the chance to work, travel, visit friends and family, and otherwise experience joy in life.

Australia has had one of the toughest Covid-19-prevention regimes in the world, having earlier this month locked down the city of Melbourne for the sixth time. Previous lockdowns have seen public housing residents confined to their apartments, unable even to venture outside, cops patrolling the hallways of high-rises and groceries having to be delivered – sporadically and less than fresh – to the frazzled inhabitants. The heavy-handed restrictions won Andrews the ignominious nickname of ‘Kim Jong-Dan’.

Unlike Sutton, most Australians seemed confident about where to place the blame for the soaring suicide rate among teen girls, linking the increase in deaths with the oppressive lockdowns. Remarking that the country deserved better, social media users demanded the authorities be held to account.

Many noted that the state government didn’t seem to care about the dead and dying so much as the control measures their deaths could be used to justify.

However, some were ready to defend Andrews’ administration, arguing that the rise in suicides was instead the media’s fault for “encouraging dissent.”

In 2020, just one girl died by suicide in the first seven months of the year, while, in 2021, eight have taken their own lives since January.

The shocking spike in suicides by young females was described by psychiatrist Patrick McGorry as a ‘shadow pandemic’ exacerbated by the lockdown and the government’s refusal to treat the issue with the same degree of urgency as it had Covid-19. A survey carried out last September during a lockdown found that 10% of Australians had “seriously considered suicide in the prior 30 days,” 20% had experienced “suicidal thoughts,” and a third had reported “anxiety or depressive disorder symptoms.”

While statistics released this week showed no overall increase in suicides in Victoria during the first eight months of 2021 compared with 2020, the state acknowledged there had been a rise in suicides by teenage girls during that period. From January to August last year, deaths by suicide outnumbered deaths with the virus six to one, according to official statistics, and represented a notable increase on 2019’s self-induced deaths.

Other crimes have also risen sharply since the start of the pandemic, particularly domestic violence, with more than half of those who work in the support sector reporting an increase in both the severity and frequency of cases referred to them since Covid-19 restrictions began.
Melbourne’s lockdown was extended on Monday, with residents subject to a reimposed nighttime curfew from 9pm to 5am through at least September 2.