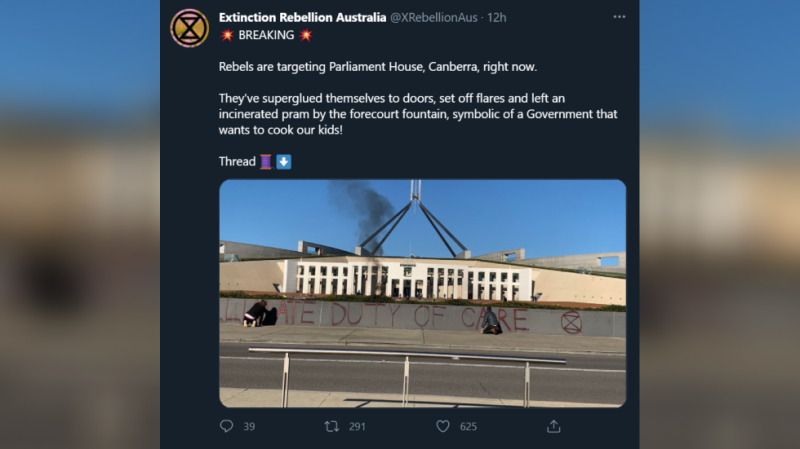 On Tuesday, a small group of protestors vandalized the parliament, as well as Prime Minister Scott Morrison’s residence in the Australian capital, penning the message for politicians that they have a “climate duty of care” in red spray paint before police intervened.

One activist superglued her hands to the floor and burned a pram to represent the effects of global warming, explaining that “I can’t in all conscience bring a child into the world to face hell-on-earth.”

Another demonstrator, Lesley Moseby, referred to as “grandmother rebel” on Twitter by Extinction Rebellion Australia, slammed the country’s approach to environmental issues. “The government’s criminal climate-policy inaction would see my grandchildren incinerated”, Lesley said during the protests.

Eight people were arrested for their involvement in the protests, but Moseby proclaimed that the group took “responsibility and are willing to face the consequences, unlike our politicians who won’t even acknowledge they have a duty of care to the children of this country.” Meanwhile, Australia’s prime minister characterised the demonstration as “foolishness”.

The protest came after the government failed to pledge plans to reduce Australia’s emissions despite the United Nations releasing a plea to states worldwide to tackle the climate crisis. Morrison, instead, upheld that “Australia is doing its part”, opting to not set a net-zero target for the immediate future.

On Monday, the United Nations Intergovernmental Panel on Climate Change issued a report which begged for the immediate end to the burning of fossil fuels as humanity is in a “code red” situation.

Australia, one of the world’s largest fossil fuel exporters, has recently experienced the wrath of severe weather. Extreme wildfires ravaged the country in 2019-2020. The months of burning were linked to some 445 deaths, and 11 million hectares (110,000 sq km) of forest and parks were destroyed nationwide.