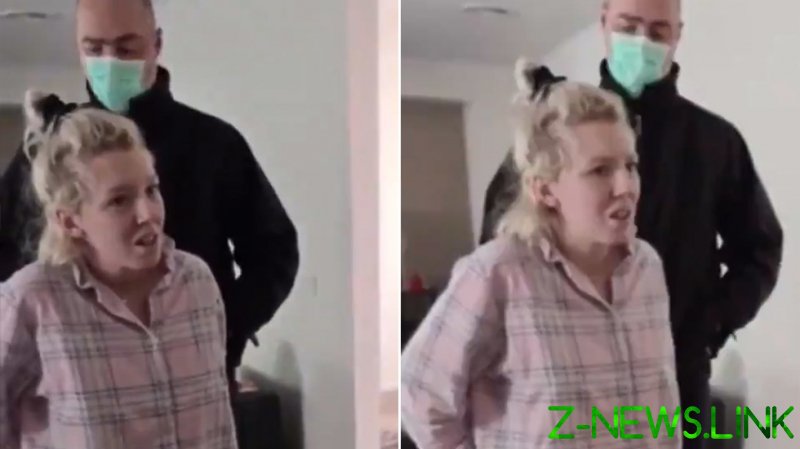 Police in Victoria have found a new way to amuse themselves in the time of corona. What with Premier Dan Andrews placing the entire state under house arrest to stop them breathing the same air as anyone else, real crime has taken something of a back seat.

There is little point trying to burgle houses when people are prevented from leaving them by law and the paucity of people on the streets means that mugging is a bit of a no-no so the real wrong ‘uns have taken some time off. This is slightly ironic considering everyone has to dress like they’re about to hold up a post office thanks to the mask mandate, but c’est la nouveau vie.

Fortunately for the local filth, Kim Jong-Dan has bestowed on them powers that would make the Stasi blush so they haven’t been left twiddling their batons while the populace remains indoors. These include being able to enter properties without a warrant, collar people for not wearing their face nappies properly and restricting how much bog roll people can buy. They also turn out to have the ability to nick people for posting things that contradict the dear leader online, and this week decided this power would be fun to use on a pregnant woman.

In a video that wouldn’t look out of place in an Ingsoc party political broadcast, masked and armed officers can be seen handcuffing a heavily-pregnant woman in front of her partner and children in her own home. She is objecting, understandably, but not resisting, yet still they put her in restraints.

The poor woman, named as 28-year-old Zoe Buhler, is still in her pajamas, and tells officers she has an ultrasound later in the day, but the rozzers are undeterred and continue to read her her rights telling her she is under arrest for “incitement” relating to a Facebook post she had made relating to a proposed lockdown protest.

And what did this offending post that warranted this heavy-handed raid say? What was its treasonous message? Simply: “Anyone from Ballarat please join us in our fight for freedom and human rights!”

Yes, my fellow citizens. The treacherous Zoe Buhler – shout out her name! – was inviting people to join an anti-lockdown demonstration in Victoria’s third-largest city this weekend! Outrageous sedition!

The video shows Zoe, clearly distraught about not just her fate but her unborn child’s, telling the officers she is happy to take down the post, but they are unmoved. She sobs as they tell her they will be taking all the devices in her house regardless of whether they belong to her, her partner or her sister, as one of them apparently does. At no point does Zoe get aggressive, but as she tries to explain herself the patronizing commandant informs her they will be carting her off to the station where she will have a right to a lawyer. All over a post on Facebook relating to an event that hasn’t even taken place yet.

The clip ends as a burly officer relieves her partner, who is holding their child, of the phone he has been using to film their jackbooted home invasion.

Anyone who can watch this video and not feel a chill run up their spine is either the type who would have shopped their own brother for listening to western music in East Berlin or is so drunk on Covid-19 kool-aid they have completely taken leave of their senses. Either the Antipodean Stasi have been trawling Facebook for wrongthink and dissent relating to Chairman Dan’s ridiculous restrictions, or some lockdown fanatic has grassed this poor woman up. Either situation has the hallmarks of a police state that anyone who enjoys and loves freedom should both abhor and fear.

Ms Buhler isn’t the only person to have had her collar felt over her controversial desire to go outside without having to dress like a highwayman. Two other men have been arrested this week for trying to organize a Freedom Rally in Melbourne city center. They have been charged with “coordination and encouragement” of the protest, according to the Guardian, which itself has been doing its best to shop anyone who thinks Dan Andrews is a tyrannical arse to the authorities.

Since Chairman Dan introduced the harshest lockdown outside China on Victorians, the police have sent drones into the air to look for people walking their dogs without due care and attention, been videoed violently shoving a woman who refused to wear a mask to the ground and is now clapping irons on a pregnant woman in front of her kids. One might think that would give pause to the Premier about continuing this police state, but no, he wants to string this state of affairs out for another year.

This is all over an illness that has claimed just 663 lives in a country of 25 million people, the vast majority of whom, according to a number of high-profile Victorian doctors, were “frail people over 80 years, many of whom also had significant comorbidities. In Victoria, more than 73 percent of known Covid-19 deaths resided in nursing homes. For people who are physically well and under 60 years of age, the mortality risk is extremely low.” Obviously, the lives of the elderly are important, but locking up an entire state over deaths to the already infirm is palpably insane behaviour.

The late, great Aussie journalist, Clive James, once said, “the problem with Australians isn’t that so many of them are descended from prisoners, but too many are descended from prison guards”. I’m not sure if Dan Andrews has traced his ancestry, but since he seems hell bent on turning his corner of Australia back into its previous incarnation as a penal colony, he’s giving a pretty good indication of which side of the bars his lot were on when the First Fleet sailed into Botany Bay in 1788.