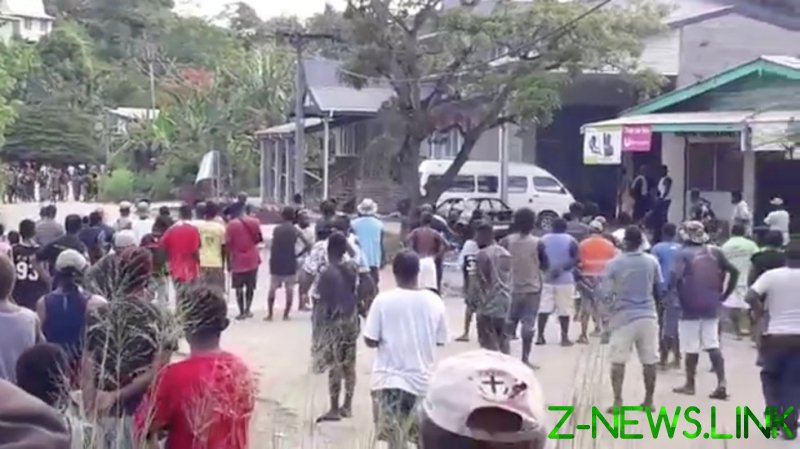 Australia’s Prime Minister Scott Morrison announced the deployment on Thursday, saying that a detachment of some 75 federal police officers, 43 troops and at least five diplomats are heading to the islands “to provide stability and security” and help local authorities guard important infrastructure.

Their mission is expected to last several weeks, and comes amid growing unrest and protests linked to a litany of domestic issues – perhaps chief among them a decision by the Solomon government in 2019 to cut diplomatic ties with Taiwan in favor of China, which considers Taiwan part of its own territory.

Morrison, however, insisted that “It is not the Australian government’s intention in any way to intervene in the internal affairs of the Solomon Islands,” adding that the deployment “does not indicate any position on the internal issues” of the nation.

The islands’ prime minister, Manasseh Sogavare, announced a 36-hour lockdown on Wednesday following a massive protest in the capital city of Honiara, where demonstrators demanded his resignation. At one point, protesters even tried to storm the parliament building, and later ignited a blaze at a hut directly adjacent to the legislature.

Shops and other buildings in the city’s Chinatown district were also looted and set ablaze, despite the ongoing lockdown and curfew orders. The destruction was captured in footage making the rounds online, with damaged and smoldering buildings seen amid a sea of debris.

On Friday, as Australian personnel arrived, the PM pinned the protests on unspecified foreign states, saying demonstrators had been “fed with false and deliberate lies” about the islands’ relationship with Beijing.

“These very countries that are now influencing [the protesters] are the countries that don’t want ties with the People’s Republic of China, and they are discouraging Solomon Islands to enter into diplomatic relations,” Sogavare said, though declined to name any particular nation.